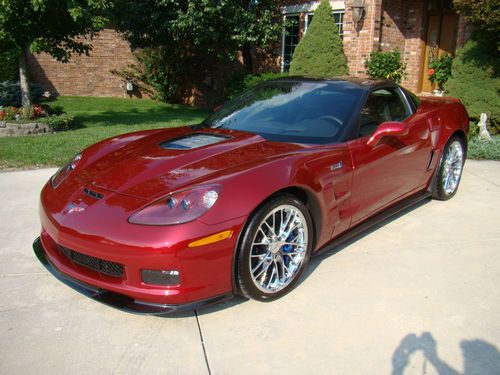 2011 Corvette ZR coupe with the LS9 6.2L supercharged V8, 638 horsepower, 6 speed trans, loaded with all options.  This car is brand new in every way with only 820 miles.  It is stored in a heated and air conditioned garage.  It has never seen snow or rain.  Non-smoking owner.  I have upgraded the floor and cargo mats with ZR1 logo'd Lloyds mats.  This car is Crystal Red Metallic.  There were only 64 CRM's produced in 2011 out of approximately 899 ZR1's built.  The interior is the 3ZR package of premium leather in Titanium and black.  Only 21% of the cars had this interior color so this combination shows less than 20 made in this configuration.  MSRP was $124,900 with $14,150 in options.  Chrome aluminum wheels.  Custom fit GM ZR1 black car cover included.  This car drives and handles like no other car for the money.  The dual clutch shifts much easier than then the Z06 clutch and is smoother, but can smoke the tires at 60 mph in first gear.  Top speed is listed at 205 mph in stock form.  Zero to 60 in low 3 second range.  Carbon fiber throughout the car including the hood and top.  Brake covers and front license plate still in the back.  A truly world class car that just beat the new Viper on the track but is tame enough to be a daily driver.  I'm building a new house so as the mileage reflects, i need to liquidate a "toy".  $5,000 deposit required to hold the car for inspection.  Fly in and drive it home.  20 mpg on the highway.