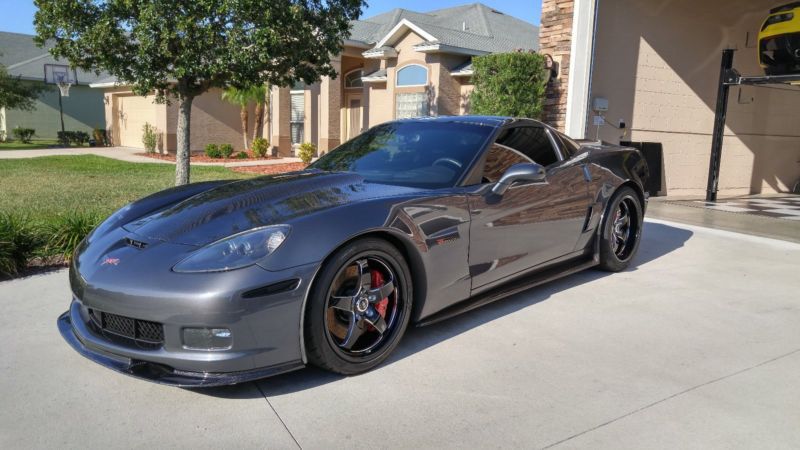 If you have any questions feel free to email: eldenehhreha@clubmorgan.com .

ONE OF THE NICEST ZO6'S OUT THERE. THE CAR IS IN GREAT CONDITION INSIDE AND OUT AND HAS TONS OF
UPGRADES INCLUDING ENGINE, INTERIOR SEATS AND OUTSIDE BODY KIT. ALL MOTOR AND SUSPENSION WORK WAS DONE BY REDLINE
MOTORSPORTS IN SOUTH FLORIDA(HOWARD TANNER). IT HAS CARAVAGGIO RACE SEATS AND SIDE SKIRTS,HOOD, REAR DIFFUSER REAR
SPOILER AND FRONT LIP SPOILER ALL DONE BY SUPERVETTES. WHEELS ARE 1 OFF WELD RTS POWDERCOATED STAGGERED 19" FRONT
AND REAR. THE TIRES ARE NITTO NTO5R 345/30/19 REAR AND 225/40/19 UPFRONT. THEY WERE PUT ON THE CAR TODAY AND HAVE
LESS THAN 10 MILES ON THEM.. THERE IS NO OTHER SET LIKE THEM IN THE WORLD.. ALL WORK INCLUDING ENGINE AND EXTERIOR
WAS DONE LESS THAN 250 MILES AGO ( OR WITHIN 6 MONTHS). THE CAR IS EXTREMLY FAST AND TURNS HEADS WHEREVER IT IS. IT
HAS NEVER BEEN RACED OR TRACKED AND HAS NEVER BEEN IN THE RAIN. ALL TUNNING ALSO DONE BY HOWARD TANNER FROM REDLINE
MOTORSPORTS IN POMPANO BEACH FLORIDA. OVER 105K INVESTED IN THIS BUILD AND NOTHING BUT THE BEST PARTS ARE ON THIS
CAR. IT MAKES 780RWHP ON VP103 (WHICH IT IS TUNNED FOR) CAN RUN 93 IN IT BUT I WOULDNT GET IN HARD ON PUMP GAS..
JUST SAYING. HERE IS ALL THE WORK DONE BY RED LINE...
STAGE 4-ZO6 Engine Package
· Remove Engine
· Finish stock block to 4.130: bore with deck plates
· Forged Steel 4.00” Crankshaft
· Forged Aluminum Pistons for 9.7:1 Compression
· Forced Induction Ring Pack
· Forged Steel 6.125” connecting rods
· MLS head gaskets
· ARP Head Bolts
· ARP Crank Balancer with overdrive lower for more boost
· GM Race Lifters
· MSD Intake Manifold
· TR6 Spark Plugs
· New Oil and Filter (Gibbs Racing Break in and then to LS30)
· McLeod Twin Disk Clutch Assembly to support 1000HP
· Reinstallation of engine
· East Coast Supercharger NOVI 1500 Supercharger System
· American Racing Long Tube Stainless Steel Headers
· High Flow cats with X pipe
· Custom Ground Stage 3-SC camshaft
· Dual Valve Springs with Titanium retainers. Locks and Keepers
· 160 degree thermostat
· Mild to Wild Exhaust Control Module
· MGW Short Throw Shifter
· B&B Stainless Steel Axle Back Mufflers
· Engine calibration
· PFADT Coil over system with sway bars
· Corner Balance car