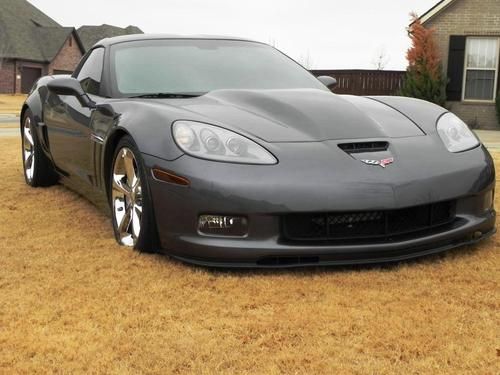 Listed for sale is my 2010 Corvette Grand Sport Coupe in 3LT trim with a 6 speed manual transmission.  I have it listed for $53,749, but I will carefully consider all reasonable offers.  The car is located in Fayetteville, Arkansas.

This is your opportunity to own a 700 horsepower car that is very easy to drive.  When the car was only a few weeks old I shipped it to Whipple Superchargers in Fresno, California where they installed a polished twin screw supercharger and intercooler.  To clear the supercharger they had a custom hood painted and installed on the car.  With a very moderate amount of boost (about 9 lbs) the engine developed approximately 700 horsepower (it dynoed 610 rear wheel horsepower on Whipple's dyno).

Compare this car to a much more expensive Callaway SC606 that has a less efficient roots type supercharger and about 100 less horsepower or to a Z06 or ZR1 that are both less powerful and have fixed roofs.  When the weather is nice you can cruise with the top off and enjoy the sound of 700 horsepower.

Listed below are other options and modifications.

If you have any questions please feel free to contact me at sheldon@cox-internet.com or 479-283-0158.