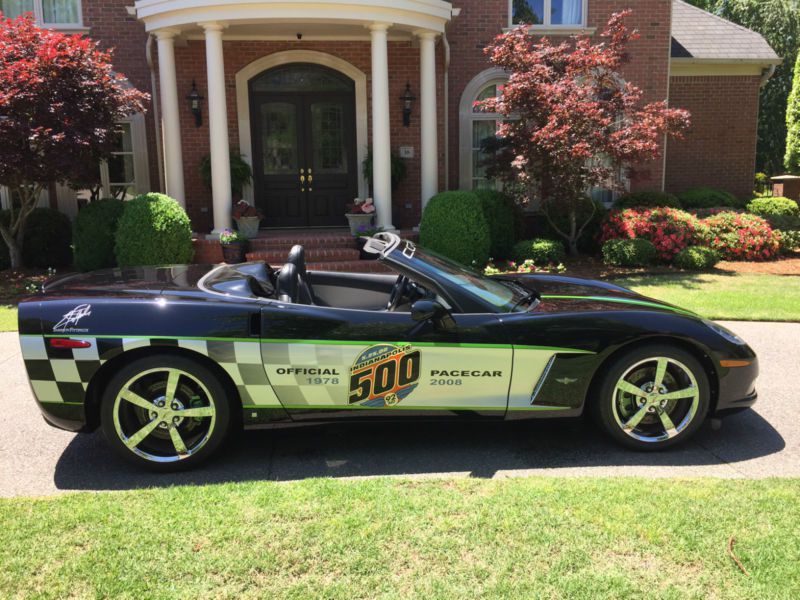 If you have any questions feel free to email: vitavssessler@ukswingers.net .

Up for sale is our 2008 Corvette Indy Pace Car Convertible. This car is #264 of 500, and one of very few
convertibles built with the Fittipaldi Pace Replica package. This car has been maintained by the book and all
maintenance is up to date. I am the second owner and have owned it for 2 years. The original owner from Oklahoma
drove the car very little, mostly to corvette shows around the region, which is what we have done as well. The
brakes and tires are 5,000 miles old. This car turns heads, and on a nice day, you will get a lot of honks and
thumbs up gestures! This Indy is a very highly optioned car. I have attached a photo of the MSRP printout, ($71,160
MSRP) ,but some of the key options are: Z-51 package, Dual Mode exhaust,(cool), Heads up display, Navigation, Power
top, Bose sound system, 6 speed auto tranny with paddle shifters, Two toned interior with Indy insignias on
headrests, chrome wheels, and many more options you can see on the list price photo.
This car has never been wrecked, painted or smoked in. It has been garage kept it's entire life. It comes with a
custom cover to wear in the garage, as well as a bra cover for hwy trips. We are selling because we have our eye on
a boat. The mileage may increase slightly as there are some pretty days coming up.
I have also included photos of the build sheet, service records, and letters of authenticity for your review. This
car is advertised in other publications, so the listing may end suddenly. Please email questions and I will get
back to you as soon as I can. Thanks for looking at this amazing car!