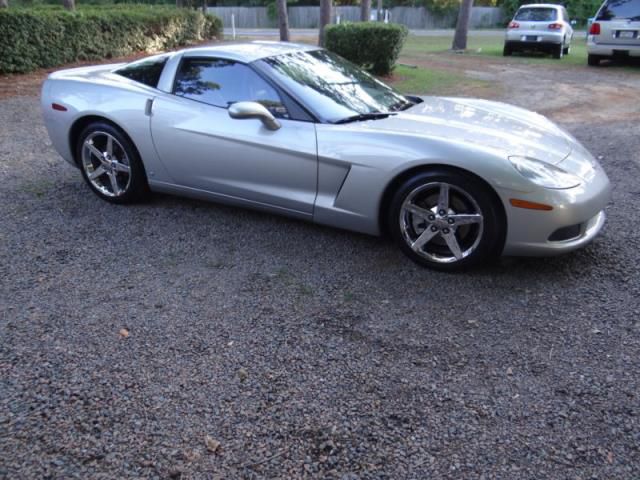 For sale is my 2007 Chevrolet Corvette Base Coupe 6.0 LS2 auto Trans , paddle shifts , heads up display , 3LT package , 56k miles , silver exterior with gray interior , I am the second owner of this car I have had it for over 2 years I do not want to sell it and I do not have to sell it it is a business choice I am making , this car is in excellent condition with only minimum wear . it has been adult owned by me and the previous owner it has not been modified or hot rodded , I also have the original window sticker and 2 sets of keys and remotes , I am a ASE Certified Tech and have maintained the car my self , it has had mobile one oil and filter every 2500 miles , it has a new radiator , air filter changed every 3k miles , it has a new shift cable and a new drivers window module/regulator/motor , it also has a recent interstate battery , the interior is excellent with only minor wear on drivers seat the carpet is great it does have a tiny spot in the trunk were something spilled very tiny , it has the self tinting tint on the windows , it has a recent set of GM floor matts with the corvette logo on each , when new it had the GM chrome door handles installed and a spoiler , it has BF goodrich ta tires that I bought new and had put on about 15000 miles ago so they are very nice . 3lt am/fm 6 disc cd changer , mp3 and xm satellite radio service . onstar bose premium 7 speaker system " for a factory stereo it is unreal it has 10" woofers in the front door it sounds great" heads up display power telescoping steering wheel heated seats auto dim power rear view memory package seats and all stereo and driving settings front and side impact air bgs power driver seat and power pass seat steering wheel controls chrome aluminum wheels it does have turn by turn navigation but not navigation stereo with screen ls2 engine 400 hp 400 tqr active handling traction control system 4 wheel ind suspension power speed sensitive steering tire press moniture system abs keyless doors keyless start which is so nice power heated mirrors dual zone ac cruise driver info center it has all kinds of drivers settings as far as performance and such it is a very fast car 12 sec qtr mile and 186 top speed , and it goes around corners if you want to know about how good the performance is goto "top gear BBC" web site there you can select previous road test and they have tested a base 07 like this and it went 1.26 around there test track faster then most euro and exotics. the exterior is nice couple light scratches on the front bumper nothing noticable I wash the car almost daily and vacuum as well it has never had sand in it the carpet is excellent any questions please email me I still owe on the car but the day you pay we can get the title that day.