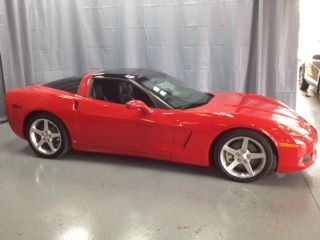 You are bidding on a 2006 Chevrolet Corvette 2dr Coupe with a glass removable hardtop.  Powered by a 6.0L SFI V8 and a 6 speed Auotmatic Transmission which delivers 400 HP.  This Corvette is equiped with the 3LT Perferred Equipment Group which includes the 7 speaker Bose Primium Audio System with XM Radio and a 6-disk changer.  It also has the Memory Package with heated driver and passanger seats and leather wrapped steering wheel, polished aluminum wheels, Heads Up Display, Active Handling Pkg and the Z51 Performance PKG.  It has two new tires and has never ran on anything but Mobil One Oil.  Local pick up only or buyer to arrange shippping.  $1000.00 refundable deposit at the end of the auction and valid us funds prior to delivery.  Good Luck.