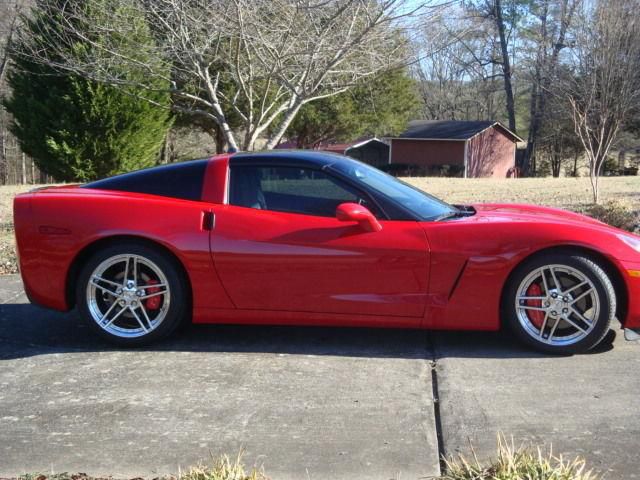 Beautiful 2005 Corvette, Victory Red Paint. The Interior is Cashmere (Tan Leather). Automatic Transmission. My Corvette is Fully Loaded, it is a 1SB Package Vehicle which means that there is $4,360 worth of Options in this one package. It has a Transparent Top, 2010 Chrome ZO6 Wheels ($1,695), Performance Axle, On Star, BOSE Premium Sound System, Heads Up Display, Tilt & Tele Steering Wheel, Power Sport Seats, Heated Seats, XM Satellite Radio, Home Link System. etc, etc. It is LOADED. It Does NOT Have NAV. It has Full Set (4) Brand New Michelin Sport Pilot (Run Flat) tires that's an additional $1,795. Brand New Corvette Caliper Covers ($320). It also has a Brand New Corsa Exhaust System ($1400). It is a Very Nice Corvette; it has 58890 miles but looks and drives like it has 15k miles on it. You will be hard pressed to find another 2005 Corvette in this condition with these options for this price. Take a look at the pictures and contact me if you are interested. When comparing Corvettes, Please keep in mind that mine has New Chrome Wheels, Full Set (4) New Michelin Run Flat Tires, New Corsa Exhaust, etc. Auto Check Rating of 86 is "ABOVE" average. My Corvette rates out at "94" ..!! Also, I have two sets of Floor Mats. One is the Weather Tech Foul Weather mats and the others are the Cashmere Carpet Mats. It also has the Custom Cargo Logo Mat. I took one pictures of the Engine with the Fuel Rail Cover off of the drivers side to show how clean the engine is. Notice the Under carriage of the corvette, it is super NICE!! Also, notice the Corvette Emblems on the Front and Rear...they show NO signs of Fading, this shows my Corvette is a Garage Kept Vehicle. Thanks for looking...Also, The ZO6 Chrome Wheels show NO Curb Rash, NONE, Not a Speck...!!! I have added the GM Mark Of Excellence which is on the 06 thru 2013 corvette. It is the small chrome square that is in front of the Rear Tire down at the Rocker Panel (Last Photo). Yes...I have BOTH Keys and Both Fobs. They Both have Brand New Batteries in them. Yes...The New Car Cover comes with the Corvette.