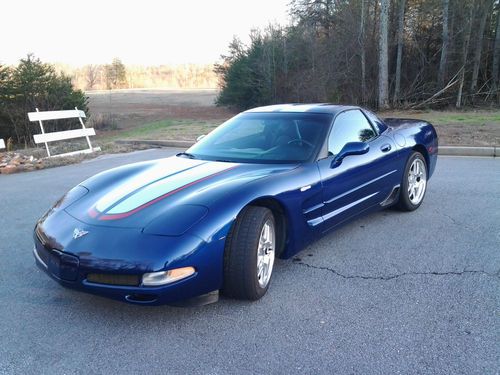 Up for sale is a 2004 Corvette Z06 Commemorative Edition . Low mileage only 29,000. Very well maintained, Runs and drives perfect with no issues, everything works like new. Front tires have about 20-30% life and rear tires are practically brand new. This car was involved in an accident when it had only 17000 and was issued a salvage title by the insurance company. I purchased it from the insurance company and had it professionally repaired. There was damage to the front of the car as well as a minor hit on the passenger rear corner.
Parts that were replaced-
Front bumper, front reinforcement bar, hood, rear bumper, and passenger quarter panel.
Professionally repaired and painted. I have receipts to the parts purchased and paint job that was done by a Chevrolet body shop
This z06 performs and looks phenomenal, only thing noticeable is some scuff marks on some of the rims.
This is a great opportunity for someone to own a commemorative low mileage z06 for the fraction of the price of a clean title z06.
I would be more than happy to show this car in person and answer any questions you may have.
Email or contact me (864) 706-2987. Also please check with your state DMV regarding salvage title vehicles. Thanks and happy bidding.