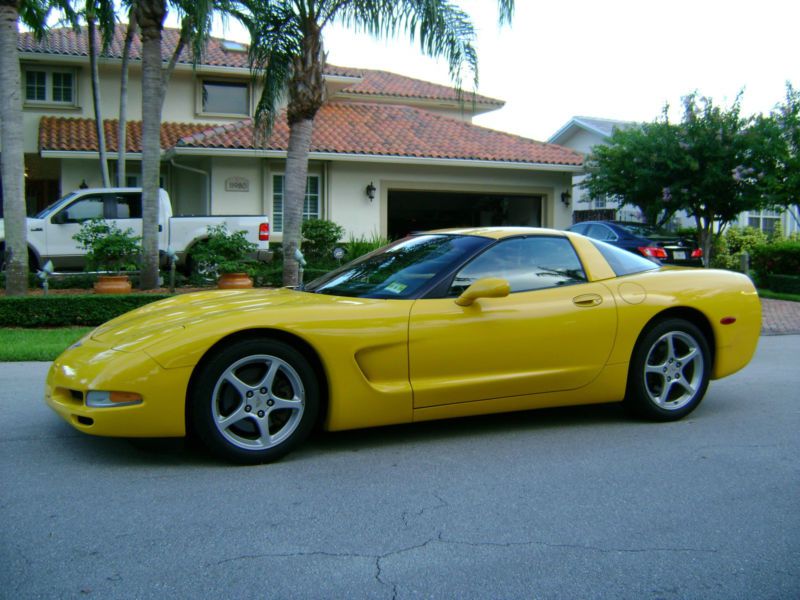 Please message me with questions at: emmittellamons@ukprofessionals.com .

NO NEED TO WATCH. CAR HAS BEEN PRICED CORRECTLY. MORE THAN A FAIR DEAL.

The photos do no justice on the car. You cannot capture the sparkle of the paint or smell of the leather in a
photo.

It is 1 of 823 built and was special ordered from the factory. Has the following options: Heads up, Sport seats,
Dual zone a/c. CD player, Memory pkg, and Pwr. tilt / tele wheel. Could easily be in a Car Show or Corvette cruise
night. Perfectly documented Carfax. I also have all of the original manuals, booklets, CD, and 50th Anniversary
brochure.

The original Millennium Yellow paint is smooth and shows like it did when new. The moldings, targa roof, window
glass, lettering, rubber seals, and all other exterior features are in exceptional condition. The wheels are mark
free and the Goodyear tires have a solid 50%+ tread. Hand washed / waxed. The exterior is a solid 9.75+ / 10.

On the inside, the Black interior shows like near new. The door panels, dash, center console, and displays etc. are
squeaky clean. All of the interior buttons / switches ( power windows, door locks, antenna, keyless entry, cruise,
heads up and lumbar sport seats ) work without issue. The Bose stereo / CD plays perfect. The undercarriage is rust
free and dry. Inside, it is a 9.9 / 10.

Mechanically, it starts, idles and drives as a well preserved car should. All of the servicing is up to date -
super cold a/c, belts, hoses, fluids all changed / maintained at the proper intervals, The engine compartment is
extra clean and it performs on all levels. Of course, the LS1 - 345 hp. engine roars when you want it to, the 6
speed goes through the gears with ease and the clutch is tight. No mechanical issues at all.

Not to many people can say a car needs nothing, but in this instance that is correct.