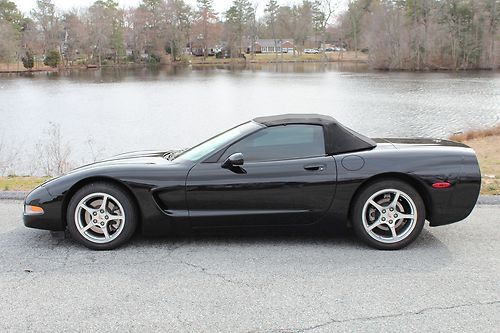 Reluctantly for sale, this Corvette has been garage kept, new summer performance tires (non-runflat), fresh engine and differential oil changes. Currently tagged in Delaware. Clear title. I purchased this Corvette in September 2011. Mileage was 18,000, so you can see that I have not driven the car much in the four years of ownership. At the time of purchase, the car check reported one accident. Previous owner advised that another driver backed into the front of the Corvette while parked. Front facia was replaced and the front of the Corvette was repainted the GM factory black. I inspected the car and found no faults and have had no issues since purchase. The Corvette has always been garaged since new and got rained on exactly once since I've owned the car. The powertrain is stock, no aftermarket air intake, stock exhaust. I was looking for a unmodified, garage kept Corvette. I had to look for quite a while to find a triple black 6-speed car. The interior is in nice shape, as you would expect of a low mileage car. A few little interior touches such as chrome radio knobs, chrome piece on emergency brake handle and a new console cover. Original Bose radio system, AM/FM cassette, with factory trunk mount CD changer. Heads Up Display. Dual zone A/C/heat, power sport seats. Traction Control. This Corvette does not have the optional Driver Select Sport Suspension. All in all, a nice little driver that needs someone with more time than I to enjoy. I believe I have priced car reasonably and I'm motivated to sell. The Corvette just sets in the garage, under a car cover and on a battery tender. I welcome appointments to inspect car. Any test drives will be accompanied. The 2001 Corvette is being sold as is, no implied warranty. The Corvette is also being advertised in other venues, so I reserve the right to end auction early. A winning bidder shall make a $500.00 non-refundable deposit within 48 hours. The balance of the payment within 7 days. Cash or Certified Bank Check. Check must clear before vehicle is released. Jeff  410-303-1610 (cell).