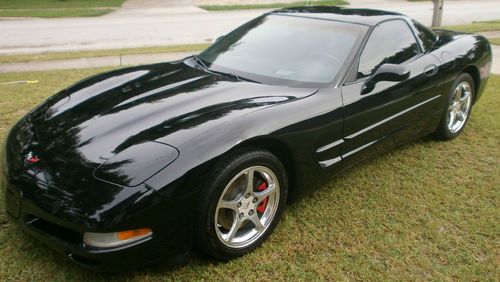 This auction is for a 2000 Chevrolet Corvette With 155,000 Highway Miles.  It is my Daily Driver.  It is Black with a Black Interior.  It has a Bose Cd Player, Climate Control AC, Power Driver and Power Passenger Sport Seats.  New ZO6 Red Calipers and Brake Pads,  New Magna Flow Exhaust, Tires are Like New with about 90% Tread Left on them.  Dual Airbag, Heads Up Display, Glass Targa Top, Recent Tune up with, New Plugs and Plug Wires.  This Corvette Runs Strong.

The Problem Areas.  The Front Bumper has some areas where the Clear Coat is pealing off.  The Driver Front Seat Bottom has a Tear.  The rest of the Seat is in Great Shape.  The Transmission just started slipping this week.  At 40 MPH going into 3rd Gear it is Slipping.  If you have any other questions, please let me know.