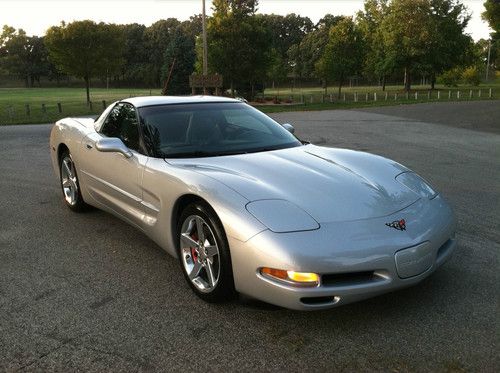 UP FOR SALE IS MY 1997 CORVETTE, HATE TO SEE IT GO BUT I ENDED UP BUYING A C6 AND DON'T HAVE ROOM FOR 2 AROUND THE HOUSE. THE CAR IS IN EXCELLENT CONDITION, AND HAS PRETTY LOW MILES AT 49K. HAS SOME MILD PERFORMANCE ADD ONS INCLUDING INTAKE, Z06 BRAKE CALIPERS, C6 POLISHED WHEELS WITH NEW BFGOODRICH GFORCE TIRES, AND EXHAUST (CLOSE TO STOCK NOISE LEVEL UNLESS ACCELERATING AND THEN ITS MORE OF A THROATY SOUND). IT COMES WITH 2 TOPS, ONE GLASS AND ONE PAINTED TO MATCH. ALWAYS SERVICED WITH MOBIL 1 OIL. IT IS A 6 SPEED MANUAL WHICH IS A BLAST TO DRIVE AND STILL GETS OVER 30 MPG ON THE HIGHWAY. INTERIOR IS A PEWTER COLOR WHICH WAS THE ONLY COLOR AVAILABLE FOR 1997. ABOUT THE ONLY FLAW ON THE CAR IS THE VINYL ON THE DOOR PANELS NEAR THE ARMREST IS PULLING AWAY A LITTLE WHICH IS VERY COMMON ON THESE CARS. ADD ON ARMRESTS WERE INSTALLED TO HELP KEEP IT FROM GOING MUCH FARTHER. FEEL FREE TO EMAIL WITH ANY QUESTIONS YOU HAVE.