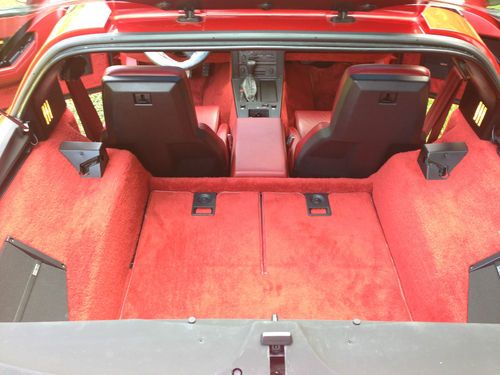 This is probably the lowest mile 85 Corvette that exists. It was purchased new from the dealership, and was then covered and stored for the past 28 years on stands in a heat controlled building. The back-story is quite interesting but I would prefer to share that off-line. I am a medical doctor by profession but I buy classic cars and restore them as a hobby with a close friend. When I heard about this car I could not pass it up. We bought it this year at an estate auction, and we have kept it in an enclosed trailer. After purchase we went through the car, only the fuel pump was replaced, otherwise the car was in perfect like new condition. It has been driven about once a week. It is incredible. It literally is nearly flawless. The car is literally a time-capsule.  We have not even detailed it with any chemicals, the pictures capture the exact condition. It has literally never seen rain.

The car is absolutely one of a kind. Original MSO, has never been titled! ALL original documents as new from dealer, lug covers lug lock etc. More pictures available on request. Original plastic on steering wheel from dealer. Dash is perfect.