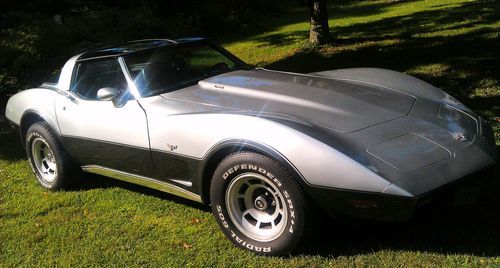 Condition: Used: A vehicle is considered used if it has been registered and issued a title. Used vehicles have had at least one previous owner. The condition of the exterior, interior and engine can vary depending on the vehicle's history. See the seller's listing for full details and description of any imperfections. ...
1978 Chevrolet Corvette Silver 25th Anniversary Edition
This car was an inheritance-so my knowledge is limited
The car Starts,Runs,Drives and stops.
The mileage shows just over 60K...but it just seems low to me.
The interior is shaky-seats are bad and so is the carpet
It has all the options--Half of them work
The car needs a little of everything
I do know the Transmission is week
Power Steering Pump leaks
Heating Core leaks (it has been bypassed)
I don't know if the engine is original
Radio has been changed
The car is VERY PRETTY!!
If your looking for a winter project this could be it!
text me with questions 269-930-3827