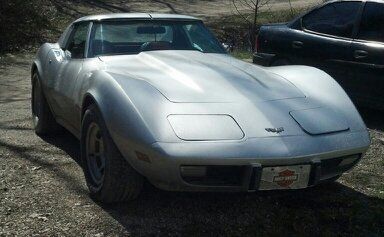 I am selling a 1977 corvette.  I bought this car off my father in law so I don't have a lot of information about it but ill tell you what I do know. its silver with T-tops. Its an automatic and has 117,000 miles on it.  its been garage kept as far as I know, theres no major rust damage on the frame or the body that ive noticed. it has the original spare tire,  It had been repainted years ago its original color and has all original interior. the car does leak a little power steering fluid which is the only issue ive had from it. my father in law put a new exhaust and alternator on it 2 yrs ago. other than that it drives and sounds great. if you have any other questions feel free to message me, or if you would like more photos you can call or text my cell phone 812-528-0150