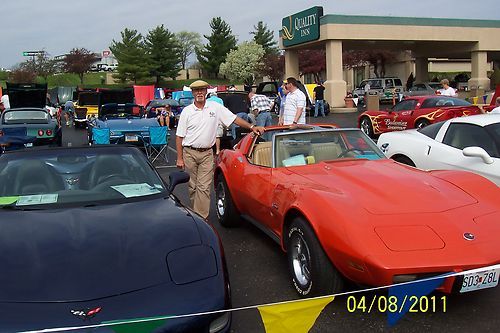 Up for auction is a 1976 Corvette Stingray Coupe. It's an L-82, numbers matching. It is owned by a close friend, who doesn't have an ebay account. It use to be long to my best friend since 2006. Tony bought it just before his passing in 2011. It originally was bought new in Oklahoma, then sold in Arkansas. Where it resided till 2006, when My best friend Bob brought it to Missouri. It's been here since then.

This numbers matching Corvette Coupe has never been wrecked, and has only repaint, in 2008. The carpets were replaced in 2009, and the luggage rack was added at the same time. Floor mats were bought during the same time period.

The engine is an L-82, that burns no oil and runs very strong. Transmission does not leak or have any problems. The trailing arms were rebuilt in 2010, and all front bushings were replaced then as well. It now, as of 2010, has a new 3 row aluminum radiator. and all new hoses. The clock doesn't work. The radio works, but to perform better, it needs modern guts put inside. Air Conditioning will work, but leaks out in about a week. I think it is O-rings, from sitting so much.

The wheels and tires came off another 76 Corvette Tony sold. They wanted the rally wheel combo, so he switched. Tires have about 80% tread. And there is a key for the wheel locks.

Tony just, in the past 2 weeks had the ignition system worked on. All new plugs and wires were put on, because the chrome headers would burn them up. He also at the same time replaced the headers for factory exhaust manifolds. And reduced the exhaust tubes back to 2 and a half inch, back to factory size. A new over flow bottle was installed as well. Old one leaked real bad.

I have driven this car on several occasions, and can tell you that it is a joy to drive. I have placed it in several car shows as well. It shows that nice.

Now the bad. It has a small oil leak from the rear main seal, and it sits way too long in Tony's shed. Basicly driven when I get a chance. He enjoys his C5 more.

This classic C3 Corvette Coupe needs a home where some one will enjoy it, and maintain it. Every time I drive it, people give thumbs up, or comments how how cool it looks. If you like to brag, then this is the Corvette for you. Every one wants to ask questions when it parked.

I think I have covered everything about this car. If there are any questions, just e-mail me, and I will answer your questions or concerns. Thank you and good luck