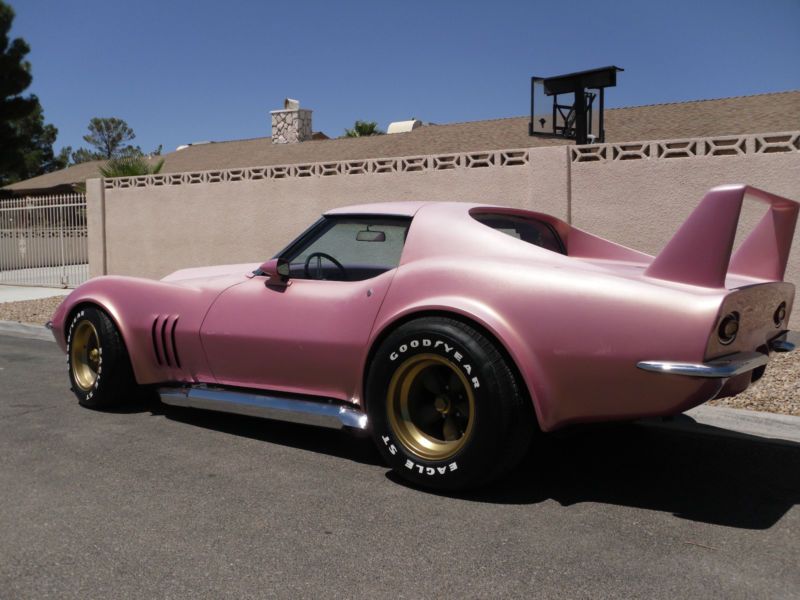 Check out this former show car built by the legendary customizer Larry Watson! This Corvette only has 15,551
original miles! This one has won many awards and trophies at car shows in the early 1970's! This car was known as
"Chetah" during its hey-day around the Southern California area!
This Corvette was purchased brand new on September 12th,1969 at Bob Keefer Chevrolet in Santa Monica,California for
the daughter of a businessman from Bellflower,CA and then was taken to the legendary customizer Larry Watson in
Hollywood,California for custom body modifications,paint and interior .He is one of the most well known crafters
along with George Barris and Von Dutch for automobile customization. The customization included L88 hood,wheel
flares,side scallops,tail lamps,5 spoke Gold painted American Racing wheels plus the rear wing is Plymouth
Superbird inspired.The pink exterior and interior was chosen by her to replace the factory Riverside Gold and
Saddle Vinyl interior. The stock 350 was then removed by Connell Chevrolet in Costa Mesa and replaced by a L88 454
where that motor remained for approximately 3 years. She later found the L88 engine to be way too powerful and was
subsequently removed and replaced in 1973 with a stock 454.
This Corvette was then sold in 1978 and remained in California until 2001 and went to Mesa,Colorado for a period of
time.They then moved to Las Vegas,Nevada where I found it in a backyard, where it has been for approximately 10
years.After much research,I spoke with the original owner and she verified the information listed.She was saddened
to hear about the car being left outside.
We rescued the Corvette and replaced the fuel tank and sending unit,replaced the battery and completed a oil
change.It does run and drive but I recommend a restoration of this rare car. The vintage Goodyear tires are from
1993 and hold air but not are not roadworthy.The options include factory A/C,tilt steering wheel,power windows and
cruise control plus AM-FM stereo.It also has power steering and power disc brakes.All of the factory gauges
including the clock work! The horn,windshield wipers and the T3 headlamps all work correctly.It does retain all
factory smog equipment.The vinyl interior and thick shag carpeting are in excellent condition.The glass and chrome
trim look great also! This vehicle does deserve to be restored back to its former glory.
Included with the vehicle are the mint original owner's manual,Protecto-plate with warranty book,delivery
envelope