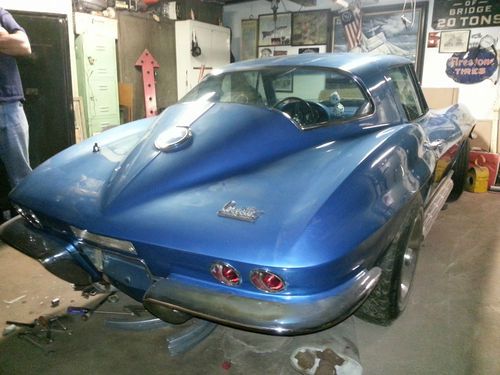 I'm listing this 1967 Chevrolet Corvette Coupe for my friend & neighbor who doesn't have internet access. He is the second owner of the car and has had it sitting in his basement garage since 1979. It was originally a smallblock car with 4 speed manual trans, power brakes and power steering. The drivetrain is currently out of the car and although he has a rebuilt Corvette 327 & 4 speed trans to go with it, neither are original to the car. I looked it over and the frame appears to be in excellent shape, and the car has never been wrecked. Interior is original as shown. There is an extra big block hood that is included with the car as shown in the photos. Unfortunately my digital camera wasn't available tonight, so my apologies in advance for the poor photos. Once I can get a better set of photos they will be added to the auction. I would prefer if anyone seriously interested contact the owner, Bob, directly until 10pm eastern time at 201-243-8030 and speak with him about the car as he would obviously be the person to best answer questions. Thank you

...just some updates from the seller. The motor & transmission mentioned in the description are not included with the car however may be available separately. Also it should be mentioned that the aforementioned engine block has had the machine work done but has not been reassembled nor have the heads been rebuilt.