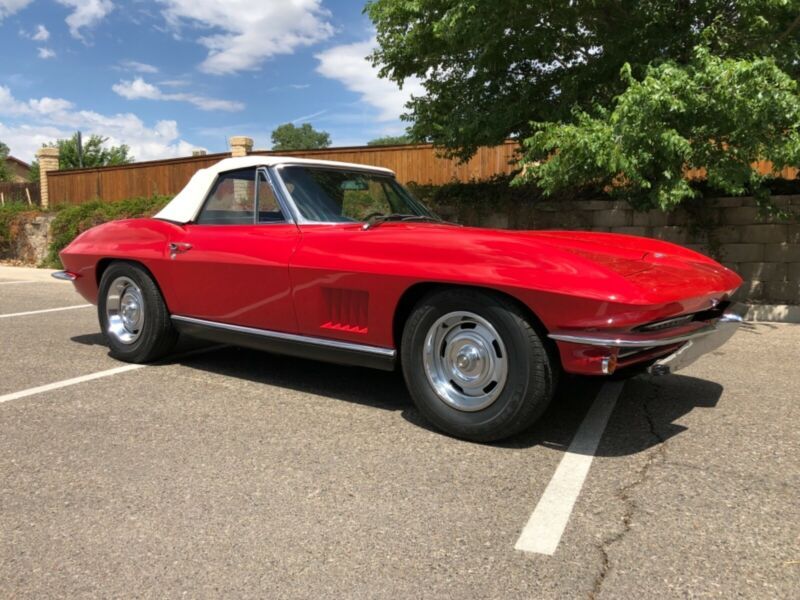 eBay
make me a last minute offer!!!! i am ready to sell!!

I AM SELLING THIS VERY NICE....VERY ORIGINAL 1967 CONVERTIBLE.
THE CAR HAS THE ORIGINAL 327 V8 300 HP AND ORIGINAL 4SP MANUAL TRANSMISSION. I AM 99% CERTAIN THAT THE INTERIOR IS ALL
ORIGINAL AND LOOKS NEAR PERFECT. THE CAR IS PAINTED IN RALLY RED BUT WAS ORIGINALLY MARLBORO RED WHICH APPEARS TO
HAVE BEEN REPAINTED MAYBE 25 YEARS AGO....BUT PAINT IS VERY NICE AND SHINY. THERE ARE ABOUT 4-5 SMALL SCRATCHES AND
TYPICAL ROCK CHIPS BEHIND THE REAR TIRES. I THOUGHT THE PAINT WAS ORIGINAL AT FIRST BUT MY LOCAL DETAIL GUY SAID IT
IS CLEAR COAT PAINT. THERE ARE ABOUT 10 SMALL BUBBLES IN THE PAINT WHICH I AM TOLD IS COMMON ON REPAINTED CORVETTES
DUE TO GASES FROM THE FIBERGLASS UNDER THE PAINT (?????). THE CAR HAS ZERO ZERO ZERO RUST ANYWHERE. THE METAL
CHASSIS INCLUDING NUTS AND BOLTS ARE RUST FREE. THE ENGINE DOES HAVE NEW MOTOR MOUNTS WHICH ARE SHOWN IN PICS. THE
CLUTCH IS VERY TIGHT AND ALL GEARS SHIFT IN AND OUT PERFECTLY. THE CAR RUNS PERFECTLY.... NO SURPRISES.