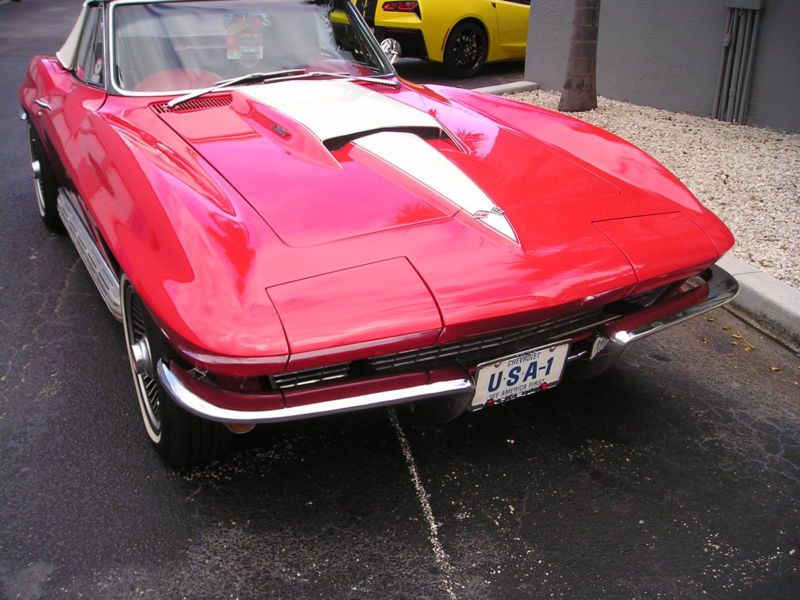 UP FOR SALE, 1967 BIG BLOCK 4 SPD CHEVROLET CORVETTE RED/RED CONVERTIBLE WITH A NON-MATCHING ORIGINAL MOTOR. THE
CAR HAS AFTERMARKET AC-BLOWS COLD ON ALL SPEEDS, PS, PB, FACTORY SIDE PIPES, BOLT ON REPO WHEELS, RED LEATHER SEATS
WITH NEW FOAM, NEW RED CARPET, HEAD RESTS, NEW TIRES, NEW CONVERTIBLE TOP, NEWER CLUTCH-APPROX 500 MILES, NEW HEAVY
DUTY COPPER WIRED STARTER AND MORE. THE MOTOR RUNS COOL WITH NO HESITIATION, AND DOESN'T SMOKE ON START UP OR IN
OPERATION. THE MOTOR DOESN'T BURN OIL OR FOULS PLUGS. THE MOTOR FIRES ON 8 CLYINDERS ALL THE TIME. I HAVEN'T
CHANGED OR CLEANED THE PLUGS IN YRS. THIS SAYS ALOT ABOUT A MOTOR ESPECALLY A BIG BLOCK WHICH USUALLY FOULS PLUGS A
LOT DUE TO JUNK CABURETORS OR LEAKY OIL SEALS ECT. THIS IS A ROCK SOLID MOTOR WITH GREAT COMPRESSION. THE MOTOR
COMPARTMENT IS PRETTY ORIGINAL AS SHOWN IN THE PHOTOS, AND HAS FACTORY ORIGINAL AND GM REPRODUCTION PARTS. I
BELIEVE THE CAR IS AN ORIGINAL SIDE PIPE CAR. NOT SURE IF THE TRANNY OR REAR END NUNBERS MATCH-NEVER CHECKED THEM.
TRUE MILES ARE UNKNOWN DUE TO THE MOTOR SWAP MANY YEARS AGO BEFORE I OWNED IT. THE REAR END APPEARS TO BE A 336 OR
355 GEAR RATIO WITH POSI TRACTION. THIS IS A TRUE BORN RARE RED/RED BIG BLOCK CAR! THE VEHICLE HAS NEWER FRONT/
REAR SPRING/STRUT BUSHINGS AND DRIVES DOWN THE ROAD STRAIGHT-RECENTLY HAD ALIGNMENT. THE POWER STEERING TURNS
WITHOUT ANY EFFORT. DOORS OPEN AND CLOSE NICELY. TAC AND SPEDO FUNCTION WELL. FRAME IS EXCELLENT WITH HARDLY ANY
SURFACE RUST IF ANY AT ALL. THE BODY IS NICE AND STRAIGHT WITH THE ORIGINAL BONDING STRIPS INTACT. CAR HAS NICE
LINES-SEE PHOTOS. THE PAINT IS OLDER, BUT LOOKS BEAUTIFUL AND STANDS TALL. THE CHROME IS IN GOOD CONDITION.