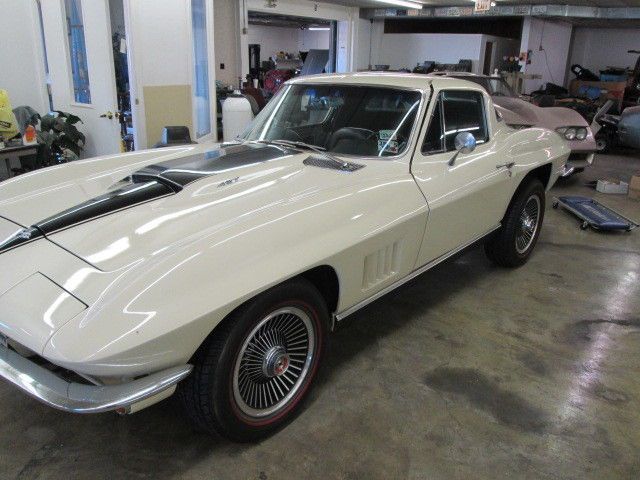 Please message me with questions at: carmelocbbarlau@4x4man.com .

1967 Corvette 427 car , 390 HP , Factory Air , 4 Speed , P/S , P/B , Electric Windows.
I purchased this car about ten years ago from a collection in mid texas , It was a running and driving car with
real nice paint and a nice interior but was filthy under the hood , This car is
obviously loaded up with options and rare enough for what it is , The paint is nice to excellent by anyone's
standards - it isn't a bright white its got a mild cream color to it - there are two pics of very minor flaws that
I found - other than that - Nice Clean Paint , The Interior is nice or new - ( our camera was taking some fuzzy
faded looking pics - the carpet is not faded but looks that way in the pics ) the dash pads are good with no cracks
- gauges are good - no radio - good carpet - no storage compartment lid , New Knock Off Wheels and Caps and Lugs -
good red-line tires at 80% - ( all put on this past spring ) , The cast number on the engine block is 3963512 - the
front of the block is smooth with no code numbers , This car is complete with a lot of new parts as seen in the
pics and doesn't need much to get it back up and going , The door latches are off so the doors don't lock shut and
the hood was just sitting on the car in the pics , The body lines on the car are very accurate especially around
the headlights and front all seems to fit very nicely - I couldn't find any signs of fenders or quarter panels
being replaced or spliced - no aftermarket fiberglass , The body is solid - the bond strips are all there , No
signs of bird cage rust or frame rust issues - the suspension hasn't been rebuilt , There has been some welding on
the trans crossmember near the center mount , The exhaust panel was taken off to put in a new fuel sending unit (
installed ) - the door panels were pulled to put in new window motors and clean up the latches ( the motors are
installed ), All the glass and all the chrome on this car is nice ,