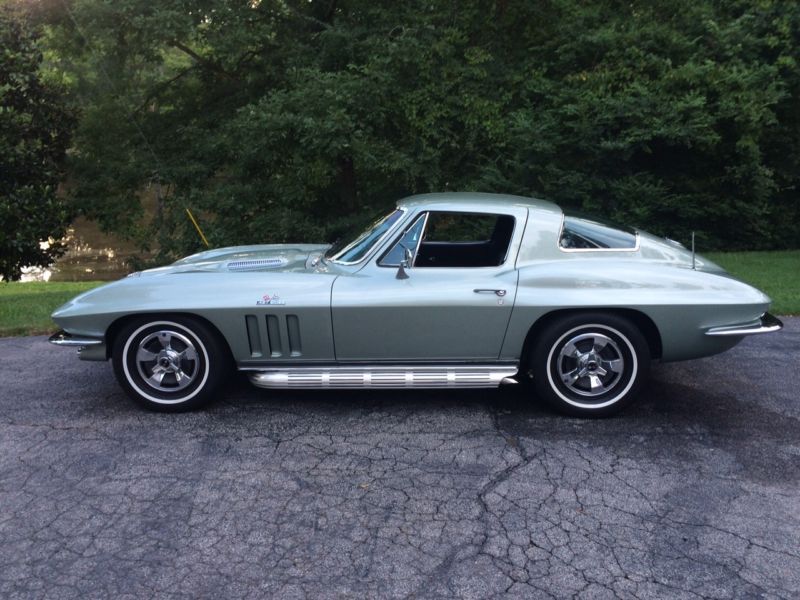 Tinted glass all the way around. No power options
except for power windows. Pure American muscle! Everything works correctly except for the clock and the original
radio. The power antenna works, but the radio only emits a static/buzzing noise when turned on. The bumpers, chrome
and emblems are all extremely nice. All bonding strips intact. The only sign of damage I see is that the lower
front valance was replaced at some point. The car drives excellent, and has many new parts including 4 new shocks
and recent rear inner bearing replacement.
The car appears to be a factory equipped side exhaust car, as there is no evidence of rocker molding brackets
having been cut off.
The car has a 1967 427 block installed casting number 3904351 date coded J136 (Oct 13, 1966). The block has been
decked and the pad in front of the R/H cylinder head is blank.
I am confident it is an original 427/425HP car based on the following: 1) 6500 RPM redline tach. 2) 80 lb oil
pressure gauge. 3) LB sticker on back of dash cluster. 4) AZ code ( 3:55 Ratio) differential with date code 4 56
(April 4, 1966). The AZ code rear was used only in 427 cars. 5) The M21 transmission has the original tag
P/N388085. This P/N M21 was used only with the AZ code rear end. The VIN is stamped on the transmission along with
the date code of PO311 (March 11, 1966). 6) Half shafts have threaded bolts with caps. 7) Rear sway bar. 8) Has
correct fuel line on frame adjacent to fuel pump with 90 degree bend.