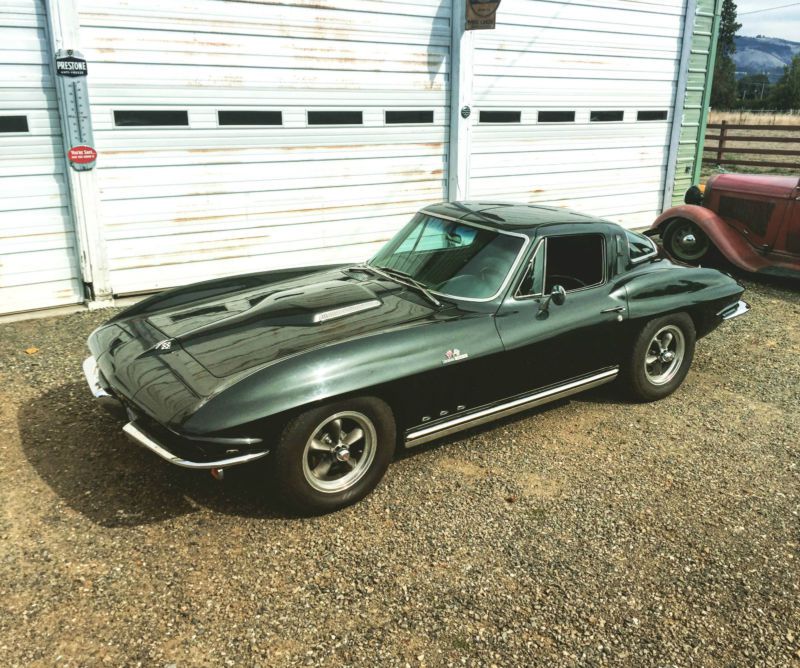 1965 Chevrolet Corvette Coupe w/ factory 396
Glen Green with Black interior
Original survivor car from California
Original car - 70,180 miles
Originally purchased at Courtesy Chevrolet in San Jose California
One of the 618 Corvette 396 Coupes made.
Factory options include:
M20 4-speed transmission
Power disc brakes
Power windows
AM/FM radio w/ power antenna
Teak steering wheel on telescopic steering column
Car also has American Racing special D-spoke wheels made specifically for Corvette w/ disc brakes.
Parts that have been replaced through the years that I know of:
Fan clutch
Spark plugs/wires
hoses/clamps
Windshield
Passenger side muffler
front head pipes
Radiator - was bought new from Chevy dealer in '87
The engine had a bad piston when I bought the car and was gone through. Engine has all of the original components
with the exception of the transistor ignition, which was gone when I bought the car.
I have owned this car over 26 years, and have put 80 miles on it in those years. It has been kept indoors, always.
The exterior of the car has good patina, showing rock chips in the expected places. The car has had some paint
work, most likely in the '70s, as it has aged consistently with the rest of the finish and is nearly impossible to
distinguish where the work has been done.
This coupe is in excellent condition with a consistent patina, showing even wear throughout the car. This is not a
restored car and has the look and feel that a true survivor should. This car has not been detailed and is presented
exactly as it has been stored for the past 25+ years. And yes, that peace sign in the rear window is from back in
the day...
This Corvette drives excellently, with a very tight feel with zero bumps/rattles. Clutch and transmission work
effortlessly as you run through the gears and the car stops very well with the factory power disc brakes.
If you are looking for a restored Corvette then this is not the car for you. If you want an honest survivor with a
consistent look and feel throughout, and a car that you aren't afraid to drive, across country if you are so
inclined, than you will find none better equipped.