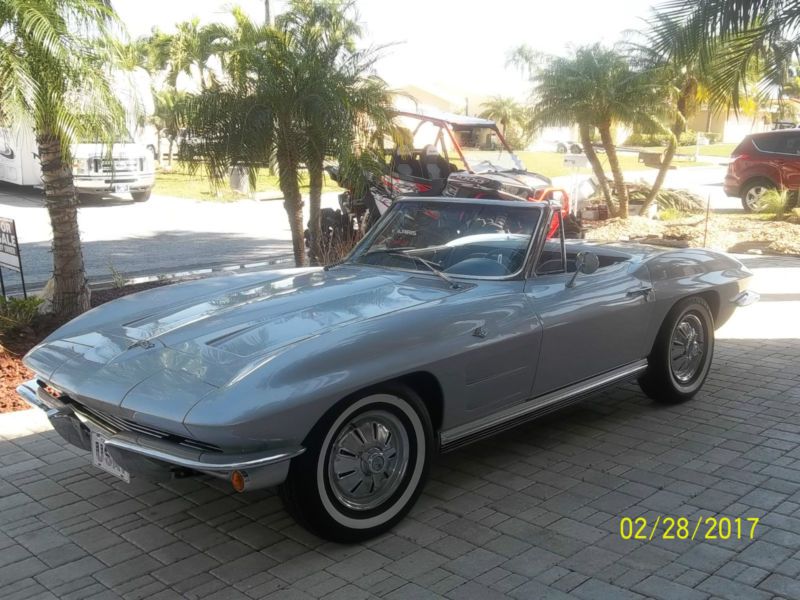 Send me an email at: kellydettling@juno.com .

THIS CAR WAS DOCUMENTATED BACK TO JULY 20TH 1963 WITH THE PRE ORDER SHEETS FROM THE DEALERSHIP DATED AND THEY ARE THE ORIGANALS NOT COPYS THEY SHOW ALL THE OPTIONS THAT WERE ORDERED AND A 200.00 DEPOSIT THAT WAS LEFT., I HAVE THE ORIGANAL RECIPT FOR THE 200.00 DEPOSIT FEE LEFT AND DATED JULY 26 1963, I HAVE NEVER SEEN THESE PRE ORDER SHEETS BEFORE ,I ALSO HAVE THE ORIGANAL BUYERS ORDER, A LETTER FROM THE SALES MAN WITH THE ENVELOPE THAT WAS MAILED TO THE NEW OWNER ON DEALERSHIP LETTER HEAD DATED NOVEMBER 5TH 1963 SAYING YOUR NEW CORVETTE HAS ARRIVED!!, I ALSO HAVE THE SALESMANS BUSINESS CARD AS WELL., WHO KEEPS ALL OF THIS STUFF????, I HAVE THE ORIGANAL WINDOW STICKER (NOT A COPY), I HAVE A RECIPT FROM THE DEALERSHIP FOR THE AMOUNTOF 4009.35 MARKED PAID IN FULL AND DATED NOVEMBER 9TH 1963, I HAVE THE ORIGANAL TEMPORARY REGISTRATION CERTIFICATE STAMPED AND DATED NOVEMBER 8TH 1963, I HAVE THE ORIGANAL OWNERS MANUEL AND ITS SIGNED BYZORA DONTOV AND LARRY SHINODA. I HAVE TWO THREE RING BINDERS FILLED WITH RECIPTS DATING TO JUNE 11 TH 1966 ALL THE WAY TO CURRENT I HAVE A COPY OF THE 2ND OWNERS ADD SELLING THE CAR TO THE THIRD OWNER IN FEB. 1998WITH THE SALE ON THE BACK. I ASO HAVE A COPY OF THE OBIYUARY OF THE ORIGINAL OWNER AND THE 1964 CORVETTE WAS MENTIONED., THIS CAR IS AMAZING, BODY IS SUPER STRAIGHT, IT IS A NO HIT BODY AND LAST OWNER HAD IT 18 YEARS., ITS A REAL SILVER AND BLACK CAR WITH SILVER HARD TOP AND BLACK SOFT TOP. POWER BRAKES, POWER WINDOWS 4SPD TRANSMISSION POSITRACT AXEL WITH 308 RATIO, AM/FM, WHITE WALL TIRES, THIS CAR HAS HAD ONLY ONE REPAINT AND THE ORIGANAL MOULD MARK IS VERY VISABLE ON THE DRIP SILL, THE PAINTON THE CAR IS EXCELLENT COND., THE CAR IS VERY CORRECT