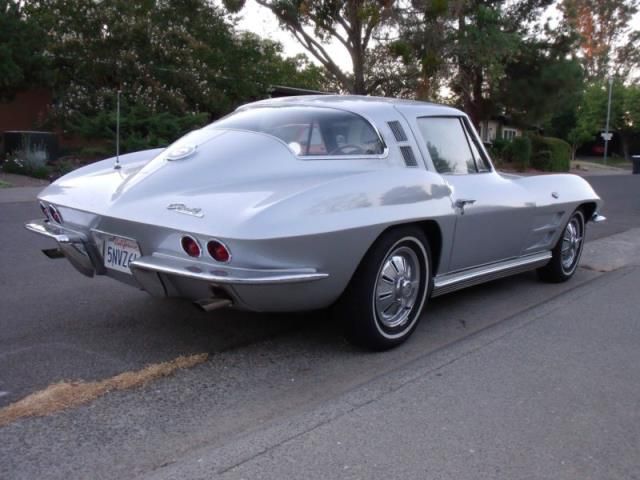 1964 Corvette Coupe L84 327 375HP PB, being sold without the fuel injection unit. Engine: It has a 327 fully rebuilt. Old parts used inside the engine are the crank, rods, block and heads. All other parts inside block were replaced. I built this engine to speck, solid cam (Duntov 30/30) factory hi compression pistons and all other needed bits & pieces. Outside the engine I used the original starter (date coded) Water Pump, Fuel Pump and deep sump oil pan. I had the engine rebuilt with a winters intake and holly carb. This combination dynode out at 375HP @6400 RPM. The modifications on this engine are, distributor changed to electric pickup, rocker arms upgraded and the valve studs changed to thread in units. I have a complete and restored fuel injection unit with K66 ignition that I was going to sell with this car, but changed my mind. If interested in this setup, email me. Transmission : 4 speed, M21 close ratio Rear : Was a 456 Posi rear. When I pulled it for a rebuild, I changed the ratio to 411. Fully rebuilt with under 200 miles on it. Suspension : I replaced the front sway bar end links, rear shocks, rear spring and end links. The tires have less than 1000 miles on them. Every thing else has unknown wear/miles on it. Body: It now has a good coat of silver on it, but it was dark blue (Daytona Blue) when it left the factory. The emblems are shinny, but have some paint loss. Sometime before I owned this car, someone had all the wheel wells flared out. When this was corrected back to a factory look, the job wasn't done so well. Although the paint is good, the body would be considered driver quality. Interior: Now black, the factory color was two tone, Dark Blue and White. The current seat covers are a little worn with slight rips on the upper inner sides of them. The carpet is a bit faded and the door panels look good. I had the steering collum rebuilt and the dash wiring harness replaced a while back. Misc : I had the engine harness replaced with the engine rebuild. I replaced the headlamp wiring to remedy a headlamp that wouldn't open properly. I replaced the alternator with a 130 amp unit. It really makes a difference on the brightness of the tail lamps. The license plates on the car have been updated to old black plates though the state DMV and come with the car. Runs/Drives: Starts up easy, idles well, runs good. Has Power brakes, stops good for 4 wheel drum brakes.