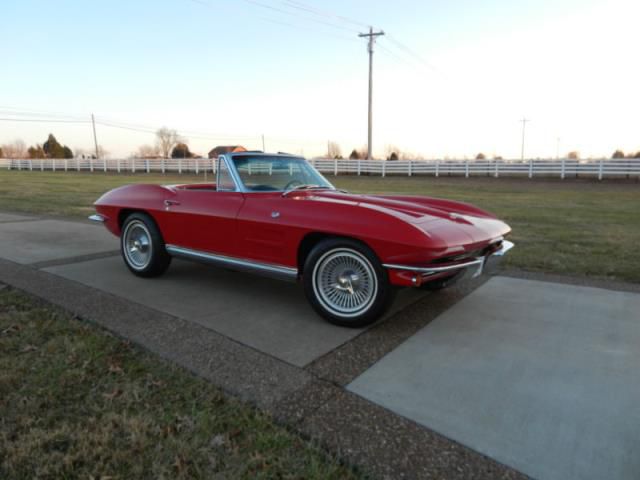 1964 Chevy Corvette Convertible Small block 327ci-300hp 4-SPEED TRAMSMISSION (LIKE NEW) UP FOR SALE IS A 1964 MATCHING s Corvette . IT IS CODE 923 RIVERSIDE RED ON THE OUT SIDE. WITH BLACK STANDARD BUCKIT SEATS INTERIOR. WITH ICE COLD VENTAGE A/C IT HAS A CODE RD=327ci-300hp ENGINE 4-SPEED WITH A STOCK POSI TRACTION REAR END. ALL MATCHING DRIVE TRAIN THAT ALSO INCLUDES THE CORRECT ALTERNATOR & STARTER. THE CARBURATOR IS ORGINAL. THIS CAR JUST RECEVED A FRAME OFF RESTORATION. IT IS ALSO EQUIPPED WITH NEW BUMPERS FRONT AND REAR. POWER BRAKES AND CONVENIENCE GROUP LIGHTING. number matching 327-300HP factory Muncie shifter AM/FM radio 15 inch KNOCK OFF WHEELS woodgrain steering wheel 6000 redline tachometer leather interior Finished in beautiful RIVERSIDE RED paint, This classic 1964 Corvette has been meticulously, restored and sure to be AN absolute had tunner. All the bright work On the car from the bumper to the trim rings produces a mirror like reflection same attention to detail is shown on the exterior restoration,It is also apparent on the interior and underneath. this roadster has several desirable features such as, power brakes, AN V-8, and a four speed M 21 MUNCIE manual transmission, all of which makes this car a true joy to drive. the number matching 300hp 327 V-8 sounds great and gets the car up to speed with absolute ease. don't miss your chance to own the pinnacle year for Corvette with this well equipped and beautifully restored mid year roadster.