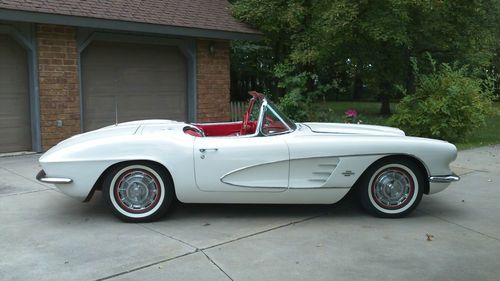 Condition: UsedA vehicle is considered used if it has been registered and issued a title. Used vehicles have had at least one previous owner. The condition of the exterior, interior and engine can vary depending on the vehicle's history. See the seller's listing for full details and description of any imperfections.Seller Notes:"Complete and original."

Up for auction is a 1961 Chevrolet Corvette . . . Very original car. One paint job years and years ago.   I've had this car for 30 years and put about 5,000 miles on it.  Interior is completely original down to the carpet.  Runs and drives as a 35,000 mile Corvette should.  Has no problems.  Could use a set of tires.  Chrome is great.

Comes with a clear MI title.

All sales are final.  No refunds.  No warranty expressed or implied.

Winning bidder is responsible for transportation expenses and arrangements.  Will assist with loading.

Check out my other items!