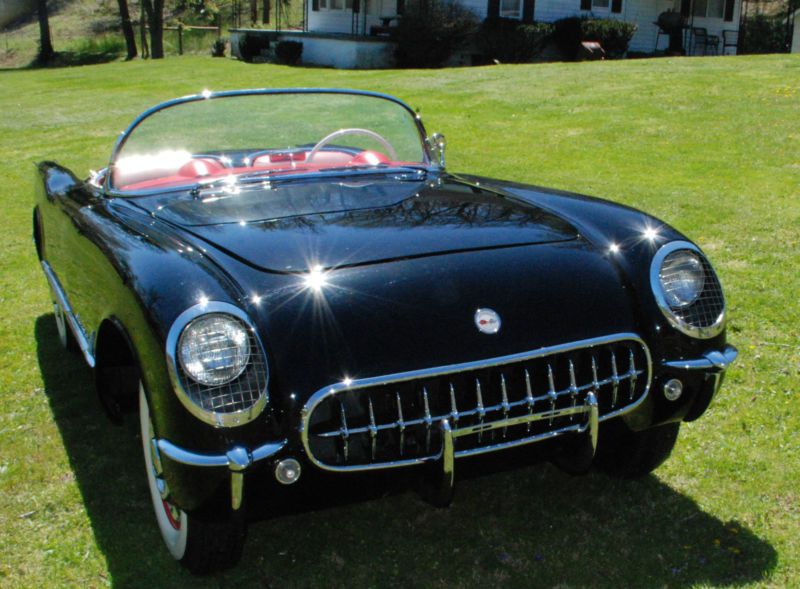 Just email me at: timothy.warsaw@chewiemail.com .

This is the most beautiful Corvette ever made by Chevrolet. The 1953-1955 Corvettes are the rarest and were truley
a piece of art. This is the "341st" Corvette ever made and has the hand laid body like the 1953. This car had a
frame-off restoration about 12 years ago and has been in a personal collection until this year. It has 63,262
actual miles and few additional since restoration. The car has the rarest color combination black/red interior. The
paint and body lines are much better than factory and looks recently done. All chrome and stainless have been
redone and is near perfect.
The interior has new Al-Knoch seat covers,carpet,and floor mats. Everything works including courtesy
lights,wonderbar radio,heater,gauges,emergency brake flashers,all lights and signals. It is a 100% matching
number,engine,transmission,rear,head,carbs,and has original air cleaners. Trunk is complete with
spare,mat,jack,tools, board,and storage bag.
I have installed new gas tank,sending unit,battery,rebuilt master cylinder,and new dated plexiglass in the side
curtains. Soft top is correct. Bows go up/down as they should. Strapes that hold top down are new and in place.
Car underneath is great with visable natural pans. Car starts,runs,drives,and stops as it should. I don't think you
will find a better or more original 54 Corvette anywhere....not a "341st" anyway.