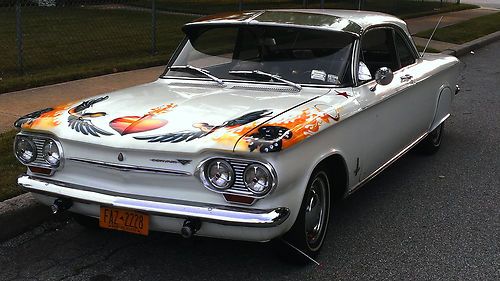 You are bidding on a 1963 corvair coupe monza 900.It has 24000 original miles bought in franklin square NY and has never left town.I bought this car for an man in town in his 70s dont know if he was the original owner.It needed a tun of work.Lets start with the motor ,new carbs, exaust dual off a 2013 victory high ball motorcycle flaired into the body ,points ,condencor,wires, cap ,rotor ,plugs, belt, gas sending unit ,break line from front to back,.valve cover gaskets, oil pan gasket, push rod tube seals ,valve ajustment ,1962 impala antennas that work, cb cd sterio ipod ready, fog lights, tires are white walls in good condition, the rims are powder coated white, wheel skirts, breezes, a visor modifided to fit from a 1959 chevy pick up, trunk pan ,floor pans ,new customcrazy carpet, A custom paint job on the front end done by the Outer limits art studio in franklin Square NY.The inerior is intact  but needs work will send pics upon request. tinted windows 35%.There is some rust on the drivers door that need looking after and by the passenger back windshield. But over aklthe car is solid.Ive been using it as my ever day car but its time for it to go. I dont have anywhere to keep over the winter and it diserves to be garaged.Please e-mail me with any questions or call 516 652 5139 Bob Thanks for looking