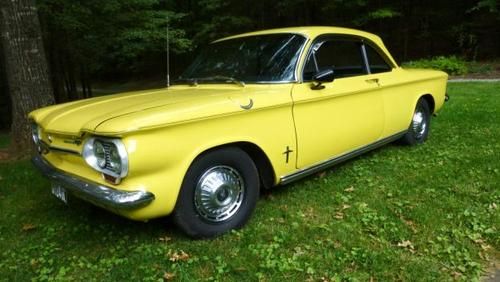 A fresh restoration of local Virginia car.  This car was purchased by the current owner several years ago.  It was driven locally around the town of Galax, VA.  It was then parked and stored in a building in the downtown area.  A local Corvair enthusiast learned of the car and purchased it.  He proceeded to restore the car.  During the restoration he removed the automatic transmission and replaced it with a Corvair standard transmission.  After it was completed, it was shown in the local area and did well.  The restorer has done several cars that I have seen and his work is very good.  Nothing is overlooked.

I am selling the car for my father-in-law.  I own a Corvair myself and this car is great.  I have checked the areas that are prone to rust in these in these cars the, cowl inside the trunk, battery box, some surface rust in the bottom of the front well, pans, rockers, etc. There is a small rust spot on the rear valence panel below the bumper. These all look great.  It is missing the ashetray.

Then some more horsetrading and the Corvair was traded back.  Now it has been driven on rare occasion around the small town.  The restoration is now about 4 years old and looks very good.  This is a car you can drive and enjoy now!