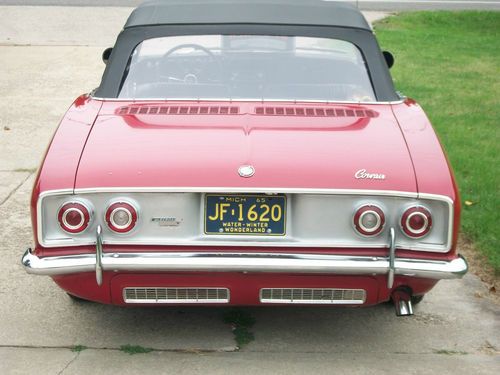 Condition: UsedA vehicle is considered used if it has been registered and issued a title. Used vehicles have had at least one previous owner. The condition of the exterior, interior and engine can vary depending on the vehicle's history. See the seller's listing for full details and description of any imperfections.Seller Notes:"This car is a driver, minor nicks and scratches, Chrome is in very good condition, new top, Interior is in excellent condition. New wheel cylinders and brakes, Master cylinder and all new bushings in front end. New strut bars and bushings, battery and carburetor rebuild. Tuned up and ready to go. Have all manuals and owner history. Spinner and stock style hubcaps and car cover go with the car. This is a rare one with the turbo powered engine."

This car is not a trailer queen, but one of the Best Drivers that you will find. The body has had a repaint  years ago and has minor nicks and scratches. Still a great looking 48 year old vehicle. The interior is in excellent condition as is all the chome and stainless, inside and out. The top is new and a car cover also is included. The brake system has been redone, New master cylinder, brake shoes and wheel cylinders. The battery is new, carburetor rebuilt and engine tuned up. The gas tank has been removed and cleaned and the sending unit replaced.  The car has the optional spinner/ wire wheel hubcaps on, but I have the original standard  caps also, all in great condition. The glass is in excellent condition. The front control arm bushings, strut rods and bushings, sway bar rubbers have all replaced. I bought this car out of a 7-8 year dry storage garage and have had to do the above repairs to make it a safe and fun car to drive. I'm the third owner and have all the history of the car plus all manuals and repair manuals. The car drives out great, Fun and safe car to drive.