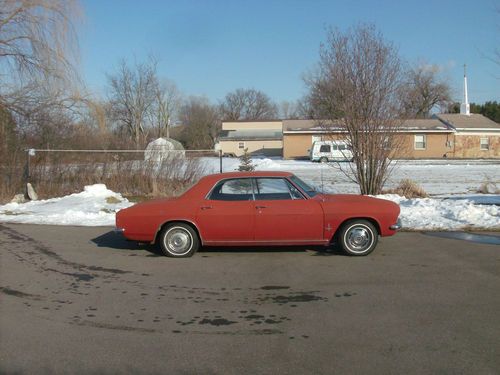 1965 Chevy Corvair original except a few spots of touch up red paint, fuel filters,plugs and wires. This 4 door is a very solid car. Rockers look great, fenders the same, one door shows two very small holes. Runs good, although not driven any distance. Some brake work needed. Heater /defrost works, wipers work, lights, but radio doesn't could just be unhooked, have not looked. Both deck lids are solid and so is engine and trunk compartments.Interior in good shape with one split in rear seat bottom. With a little brake work this car is ready to drive, take to shows as is, or just cruise. It is also all there and solid to be a good restorer.