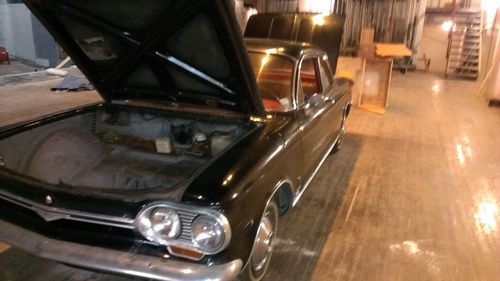 Condition: UsedA vehicle is considered used if it has been registered and issued a title. Used vehicles have had at least one previous owner. The condition of the exterior, interior and engine can vary depending on the vehicle's history. See the seller's listing for full details and description of any imperfections.Seller Notes:"64 Spyder56,281 miles6 Cylinder Turbocharged,4 Speed manual transmissionNew ignition parts,New Battery,Good tires low mileage on them. Garage kept since 1990 and am told it was stored for an additional 10 years before that. Title indicates it was a Florida car, Body is really straight, The paint appears to be original and in very good condition for a 64.Floor does not appear to be a rust through, small rust slit at bottom front of trunk, but solid, this one seems better than most I have seen recently.Engine seems to run but the gas tank leaks so I have not fully started it. Seats need to be reupholstered, floor has red shag carpet, Cassette player. Cannot confirm condition of clutch or trans-axle.Needs gas tank repair, and brakes gone through and it could be a daily driver, simple enough car.Asking $1950 OBOCall Dave 810.908.2334"

64 Spyder56,281 miles6 Cylinder Turbocharged,4 Speed manual transmissionNew ignition parts,New Battery,Good tires low mileage on them. Garage kept since 1990, Was also told it was kept in a hangar for 10 years before that.Title indicates it was a Florida car, Body is really straight, paint is good for a 64, Floor does not appear to be a rust through, small rust slit at bottom of trunk, but solid, This one seems better than most I have seen recentlyEngine seems to run but the gas tank leaks so I have not fully started it.Needs gas tank repair, and brakes gone through and it could be a daily driver, simple enough car.Asking $2500 OBO