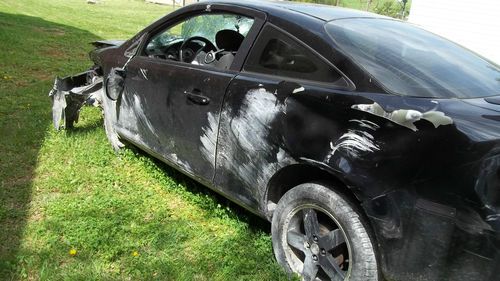 CONTACT TIME 9AM-9PM.IT IS NOT DRIVEABLE.I WILL NOT TRY AND START IT.BOTH AIR BAGS DEPLOYED.CAR HAS AROUND 176000 MILES.MOTOR IS A 2.2 ECOTECH,AUTO TRANS.A/C,PS,PB,RADIO CONTROLS ON STEERING WHEEL,CC.IT RUN GREAT BEFORE WRECK,NO GAURENTES,COMES WITH EXTRA MOTOR THAT NUMBER 2 ROD WAS KNOCKING.ALSO HAS KEYLESS ENTRY AND 2 KEYS.THE WRECK THAT WAS REPORTED ON TITLE WAS BEFORE I GOT THE CAR.I DIDNT KNOW ABOUT THAT WRECK.MY WRECK WAS NOT REPORTED.SLAMMED INTO BLOUDERS ON THE DRIVERS SIDE.STILL HAS CLEAN TITLE,.CAR WILL BE COVERED WITH PLASTIC OUTSIDE...(931)7617035,BETWEEN 9AM -9PM....CLEAN TENNESSEE TITLE IN HAND..IF YOU BUY IT AND PAY ME THRU PAYPAL I DONT CARE IF IT SITS FOR A YEAR ON MY PLACE(NO CHARGE).AFTER 1 YEAR ITS MINE AGAIN.LOL..IT IS LEFT UP TO YOU TO HAUL CAR AWAY.