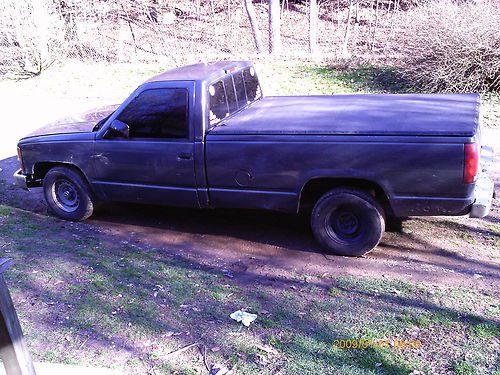 PLEASE READ ENTIRE DESCRIPTION BEFORE YOU BID!!!! THIS TRUCK RUNS AND DRIVES BUT NEEDS WORK.This is a 97 chevy with the 4.3 vorteck and it's a 5 speed.It has a 140 some thousand miles and runs strong and is cheap on gas for a full size truck about 22 mpg.It has a miss at a certain rpm which the code reader says it needs a mass flow air sensor but still very drivable,it only does it a a certain rpm sorta like it lunges.The tranny shifts good but 2nd gear will rake if you shift in to it to soon,and it has dents all over it and rust on the cab corners and on the bottom of the drivers side fender,which both fenders are beat up and need changed anyway if you were going to fix it up to paint it.It has play in the steering needs ball joints or tierod ends or both not shure and sway bar bushings they are shot,door pins and bushings for drivers side door{you have to pick up on it to shut it} and it could use back cab mount bushings.The bumpers are dented up and need changed also,it's been a work truck for me and has been a good one and reliable but it needs work.It has a clear wv title and a good inspection sticker until 8/13 and the heater works good but the ac don't not shure why and the factory cd player plays good.The window are tinted and it has a toneu cover on it and a hitch under it.The inside off the bed has a couple rust wholes on the side wall part and the seat has a couple tear places in it and it needs tires ones on it hold air but that about it.I have put new brakes all the way around it and 2 new back wheel cylinders on it about 3 months ago and a new idel arm and 2 new unaversal joints,new pickup in the destributor,new plugs,wires,and new top end gaskets from the heads uo about 4 months ago.The frame is in good shape but the body isn't,like i said it has ALOT of dents and a few rust wholes,i'm not trying to hide anything i want you to understand it is FAR from perfect but if you just want a good work truck that is dependable and won't brake you up on gas then this is it.Feel free to ask any questions you may have and bid accordingly WHAT YOU SEE IS WHAT YOU GET.You are reaponsable for pick up at my house and if haveing a shipper come get it then full payment must be made before it leaves my yard.Only bid if you intend to pay.And there is a NON-REFUNDABLE $250.00 deposit required at the end of auction.