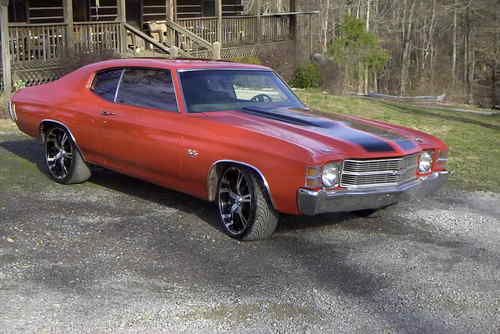 1971 CHEVELLE .  less motor  AUTO 3800 STALL. BECOOL RADIATOR. THIS WAS A DRAG CAR BEFORE I GOT IT. 373 12 BOLT  NEW GAS TANK NEW WINDSHILD. NO WINDSHIELD WIPER MOTOR. I INSTALLED A HEATER / AC BOX. NEW HEATER COIL. WIRING COULD USE SOME WORK. THIS CAR HAS SOME RUST IN FLOOR AND TRUNK PAN. I PAINTED THIS CAR MYSELF NOT PERFECT BUT FAIR.CAR NEEDS ALL INTERIOR  AND LOTS OF WORK.    GOOD PROJECT CAR.???    . I WILL ACCEPT BEST OFFER. FOR QUESTIONS CALL 931-206-4195 SOLD AS IS. NO WARRANTY.