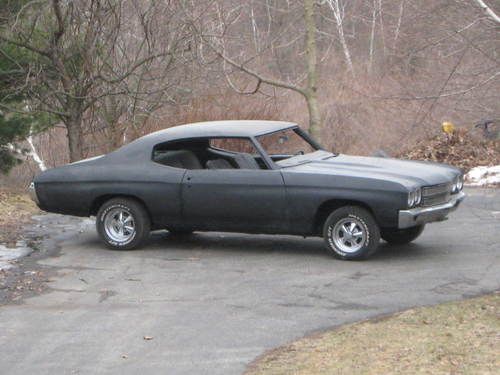 you are bidding on a 1970 chevelle california car that was made into a ss 454 clone. as u can tell by the trim tag this car was built in Van Nuys California plant as a 1970 chevelle malibu 2 door sports coupe 8 cylinder . it was painted green mist with a dark green interior.

The car spent its whole life in california untill 1994 when the owners family moved out to New Jersey. The car has never been "on the road" since then. It belonged to a kid i went to highschool with. his father had previously owned a bodyshop and it was a father and son project. they did a frame off restoration on the car between 1994 and 1999 but they never completed it. they had sent the car out for paint in 1999 and it sat in the body shop till 2004 when i traded him a 1967 camaro for the chevelle.

The way u see the car in the pictures is exactly the way i got it. it has been sitting in my moms garage since 2004 collecting dust. every time i thought id start working on it something would come up and sidetrack me. now in 2013 i have excepted that after buying a house im just not ever going to have the time to finish this car.

about the car....it has to be one of the cleanest origional sheet metal cars i have ever seen. the body is 100% gm sheet metal. you can pretty much eat off the car. the floors and trunk are perfict. along with most all the typical problem areas for chevelles. the car was stripped down to bare metal and i was told the only rot spot was on the pass quarter bottom right behind the rear wheel maby the size of a baseball??? i can see where there is filler there on the quarter and the inner wheel well. i can also tell you that at some point the weel well lip on the quarters was trimmed down to clear bigger tires. its not flush with the quarter pannel but its maby 1/3 the width now.(pictured) I am not a body guy by any means, but it  appears that the only filler used on the car was for minor dent repair. obviously there is some where the quarter meets the roof and where the windshield pillars meet the roof as these spots were filled with lead from the factory. all the gaps in the body are nice(by gm standards). (pictured) . currently the car is in black primer with about an inch of dust.

the motor is in running condition, doesn t smoke or knock, and i can demo it for you. as far as any specs on it i have no info. just that it is a 454. and i did run the numbers at one point to verify it wasn t a 402. when i got it there was no distribuitor wires or carb so i just threw some on there to get it running. the wires will need to be replaced and the carb needs to be rebuilt.

the transmission is a turbo 400, and again i have no specs on it, the shifter cable/ linkage is not hooked up so i just leave it in neutural. aslo the trans lines are just looped with rubber trans hose. the hard lines will need to be run to the cooler.

the rear end is a chevelle 12 bolt posi. i dont know the gears, but i have verified its a posi because when u jack it up bolth wheels spin in the same direction and also the car i verry hard to push while the steering wheel is turned. It is not a buick, olds, pontiac, rear.

as u can see in the pictures it also has a floor shift steering column, buckett seats,power steering, and a ss dash.

the car will need to have all the break lines and fuel lines ran, also all the wireing hooked up(included with the car). all of the glass is there except for the windshield. i have the stainless windshield and back window trim. I t will aslo need an exhaust system from the headers back. the engine needs a powersteering pump and belt.

the car has a clean and clear nj title in my name.

The interior is mostly complete, it will need carpet, a floor shifter,a headliner, the sail panels,rear seat shelf cover and seat belts.

because the shifter is not hooked up, and the lack of break lines, you can t drive this car . it will have to be trailered home. if your trailer doesn t have a winch be prepared to use a come along.

the back seat and bucket seats are currently in the car.  i took them out to take pictures of the floor pans which are usually problem areas on chevelles. The floors and trunk are 100% origional, no horrible patch jobs with those ugly weld seams front to back.