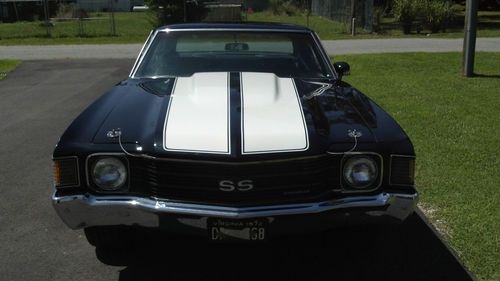 Condition: UsedA vehicle is considered used if it has been registered and issued a title. Used vehicles have had at least one previous owner. The condition of the exterior, interior and engine can vary depending on the vehicle's history. See the seller's listing for full details and description of any imperfections.Seller Notes:"Nice older restoration, Not a rotisserie restored car, Very Straight Body, Strong #3 Condition, 1 dime sized rust bubble at the top of the right rear quarter panel, Excellent Interior, Very Clean, Very Presentable. Great running, driving car."

Yes it's a REAL Chevelle SS not a Clone.

Super Nice Black on Black Chevelle SS, originally a J code L-48 small block, non numbers matching ,now it has a very strong 355 small block estimated 400 HP with a medium cam, holley 750 double pumper carb., ceramic coated headers, Air Condtioner Delete kit installed, but I'll include the original compressor and condenser setup to the winning bidder, Power Steering, flowmaster mufflers,MSD 6 ignition, 4 core radiator, manual and electric cooling fans,  sounds good like a big block, turbo 350 transmission with a 3000 stall convertor, 4.11 positraction rear end, Stock 72' SS Wheels, aftermarket GM am/fm radio with mp3, dash is not cut up,  6x9 speakers in the package tray,  factory front power disc brakes, original bench seat column shift car. Fire Extinguisher pictured is not mounted in the car,  Original bumpers. Drip rails and wheel well trim replaced. The car has a super straight body, not perfect but very good, older restoration. The only rust on the car is a dime sized bubble on the upper portion of the right rear quarter panel directly above the rear bumper, noted in the pictures, very clean interior, no rips or tears, has the original SS dash.  Solid trunk pans, all lights, blinkers, and  interior light works great, gas gauge doesn't work, I have the replacement sending unit to include with the winning bidder, Overall it's a very clean #3 condition car. I just replaced all 4 shocks, new Monroe sensatrac's, 4 new BF Goodrich Radial T/A's, new full exhaust with factory chrome tips. The car looks Very good, Very high driver quality, I get compliments everywhere I take it. Everything is presentable, and the car runs great, a real eye catcher, get in it and drive it anywhere. If you would like to view the car before auctions end or need more information, call me 757-376-7119.  Bid with Confidence, this car APPRECIATES in value, these pictures do not do the car justice. A $500 Paypal deposit is required within 48 hours of auctions close.  Contact me via phone or through ebay  with questions, BEFORE bidding. I reserve the right to cancel any bids from bidder's with excessive negative feedback. Bidder's with less than 5 feedback, contact me prior to bidding,  your bid will be cancelled if you do not.  Non paying bidders will receive negative feedback.