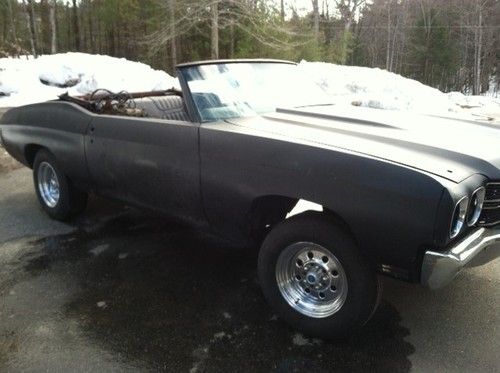 up for sale 1971 chevy chevelle convertible project car,body was removed from frame, frame was sandblasted and repainted gloss black very nice clean frame body put back on frame with new bushings and bolts,floors and cross members are solid ,new trunk pan installed,rear outer wheel houses will need some rust repair,new 1970 sheet metal nose installed with cowl induction hood(I have the flapper door) .I have core bucket seats and rear seat to go with car,has console with horse shoe shifter.nice polished cragar wheels and tires.this is a great solid start to a nice ragtop chevelle.convertible frame work is all there will need new canvas.i have a clear Tennessee title to go with car,title says model ss?.I would really like to sell this car I am open to all offers.