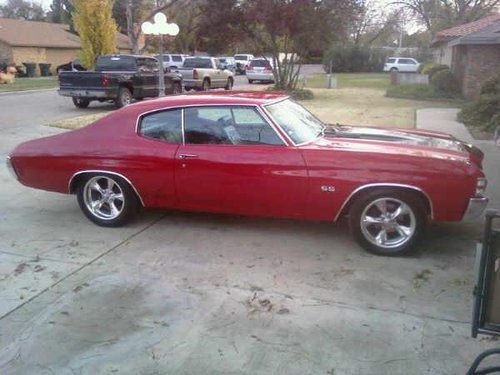 Condition: UsedA vehicle is considered used if it has been registered and issued a title. Used vehicles have had at least one previous owner. The condition of the exterior, interior and engine can vary depending on the vehicle's history. See the seller's listing for full details and description of any imperfections.Seller Notes:"Great Condition"

This car has been in the family for many years, here are the specs 1971 Chevelle SS red with black racing stripes., blace leather interior, original chrome.
Big block 502 engine (when purchased had a smaller engine replaced with the 502, has approx 65,000 miles on the 502).  Edelerock cowel hood induction, Flowmaster duel exhaust pipes.  This car has a free and clear title and is in perfect condition, in a smoke free environment.  It is a classic and is garaged in Carlsbad NM.  My family is the second owner as far as I know.
You may call me or text for any information.  Chris 432-235-3915