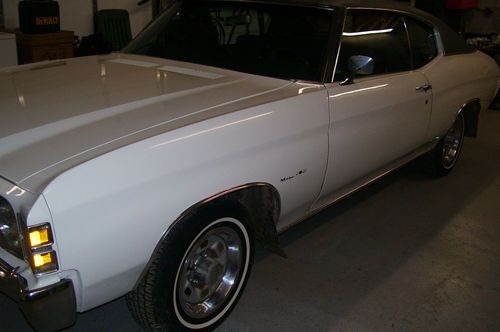 Up for auction is a 1971 Chevelle Malibu.... the body is "unmolested" other than a moonroof installed, it does have the original transmission but the engine had been changed prior to 1986 with a 305 (355909) ... so the story with the car is its been garage kept parked on carpet and owned by an 80 year man and his wife. He purchased it from his brother-in-law in 1987 with 59,710 miles on it.. it now has 114,657 miles .. the body is great with a few minor surface places... the trunk is perfect with the original jack etc.. there are two primered places around the passenger door handle and the passenger front right due to the fact the man's wife backed it out of the garage and cut the wheels to soon and clipped the garage, also a ding in the drivers side chrome molding, the vinyl top is in pretty good shape has a minor place or two but hardly noticable. The steering wheel has a couple of cracks in it like they all do. The Malibu emblems weren't on the car when I bought it, but the Chevelle emblem on the trunk is. The carpet is in great shape, there are tears in the drivers seat, none on the passenger and the back seat looks like its never been sit in... it has the 8 track player, cigarette lighter works great, radio and speakers work great, horn works, lights and brake lights work...the dash is also in great shape!!  this is a coast to coast car.. rides awesome! I would drive it anywhere.. the owners manuel is even still in the glove box in good shape! This isn't a show car as it sits, but believe me it wouldn't take a lot to get it there.. or wouldn't take a lot if someone wanted to SS clone it...  Buy it and drive it home!