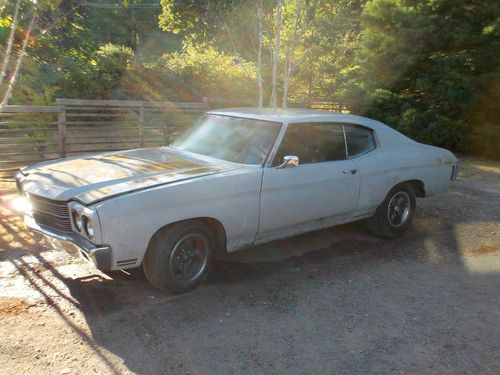 Condition: UsedA vehicle is considered used if it has been registered and issued a title. Used vehicles have had at least one previous owner. The condition of the exterior, interior and engine can vary depending on the vehicle's history. See the seller's listing for full details and description of any imperfections.Seller Notes:"This is a project car. Has typical rust areas."

This is a project car.  There is rust in the lower corners of the front fenders, lower areas in the rear quarter panels, around the trunk and rear window.  The door rockers are in good shape as well floor boards.  Trunk has some rust out but not too bad.  I don't know much about the engine, but when I bought it, he told me that he drove the car after they dropped in a rebuilt Mild built 454.  Then he took the inter wheel well out to replace it.  So when I bought it, it needed the battery hooked up, heater hoses attached and linkage attached and adjusted.  I checked the dip stick and the oil on it was clear and clean like the engine was new.  That's what I know about the engine. This auction comes with New SS hood, New Front and Rear bumpers, New door panels and rear panels, New sheet metal for under rear window, New front wheel wells (Metal), 2 used SS gauges, used SS console. Reason for selling this car is that we are moving and it needs a new home.  I also have this car on Craigslist and if I get a full price offer before the end of the action I will be cancelling this auction. Buyer to pay for shipping and a $500 non refundable deposit at end of action.  Full payment to be made within 3 days of auction end. SOLD AS IS