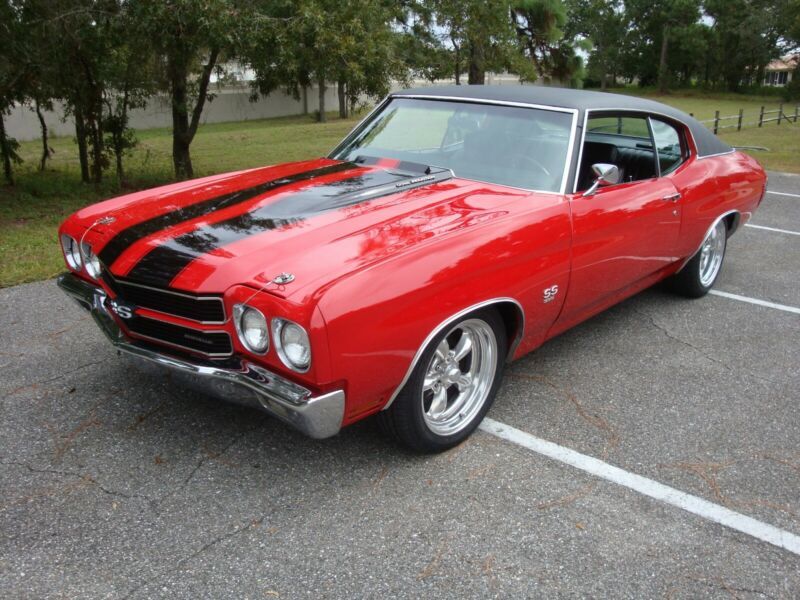 1970 Chevrolet Chevelle coupe, one of the most desired muscle cars today. This car has about
2700 miles since the restoration (original mileage unknown) with Super Sport trim, upgraded overdrive transmission,
A/C interior and big block power.
The car was professionally resprayed the 1970-correct Cranberry Red with the black SS stripe package and a black
vinyl roof. The power bulge hood is a must-have on a Chevelle with the correct working cowl induction flap. It has
very nice chrome bumpers, blacked-out grille, hood pins and blacked-out rear panel.
The car is equipped with a big block 396 cubic-inch V8 painted Chevrolet orange with chrome valve covers and the
cowl induction air cleaner with the correct seal to the hood. The big block has a Holley four-barrel carburetor and
Edelbrock Performer intake with an HEI distributor . Exhaust is handled through long-tube headers to the stainless
dual exhaust. The transmission was upgraded to a 700R4 four-speed automatic transmission that includes overdrive
and a Bowler adjustable lockup controller that is located under the dash. It has a 12 bolt rear with I believe 331
gears. It has power steering, power brakes w/discs up front and 17 American racing mags with new tires, 245/45R17
in front and 255/45R17 in the rear. Equipped with LED taillights for great visibility. The car sounds great and
it handles very well.
Black vinyl seats, carpets, dash, gauges, console, and headliner are all freshly done as part of this recently
restored package. It has the Chevy three-spoke sports steering wheel on a tilt column, horseshoe shifter with the
correct shift plate for the overdrive trans and a full round gauge package with large speed and tach gauges.
Everything works even the clock! The stereo is a retro-style unit with AM/FM stereo with a USB port. The air
conditioning is blowing nice and cold with a new compressor recently installed.