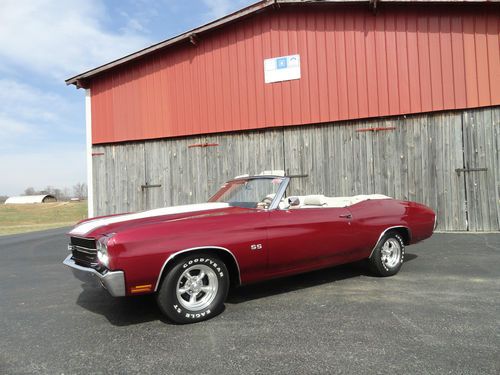 Condition: Used: A vehicle is considered used if it has been registered and issued a title. Used vehicles have had at least one previous owner. The condition of the exterior, interior and engine can vary depending on the vehicle's history. See the seller's listing for full details and description of any imperfections. ...
1970 Chevrolet Chevelle Convertible SS Tribute
You are looking at a beautiful, fully restored 1970 Chevelle. The paint was completely stripped  and replaced with the original burgundy metallic paint with the correct white stripes two years ago. The badges and emblems were also replaced at this time.
All of the chrome trim and bumpers have also been replaced. The stainless around the windshield and rear window have been polished to a blinding shine.
The new vinyl convertible top is electric. Top goes up and down very smoothly.
You will appreciate the restored and replaced white interior this summer, as it is much cooler than the usual black. (No more burning your legs). The white interior also looks great against the burgundy metallic exterior. The car has a new wooden steering wheel. We also put a new radio/CD player in this car. “Cruise to the Oldies”
We have installed all new Vintage Air components on this car, it works great. Sitting in the hot sun, don’t worry, just turn on the air and enjoy yourself. On those chilly nights, don’t put the top up. Turn on the heat and cruise til the sun comes up.
We put a new ZZ4 crate motor in this car that only has 3900 miles on it, this teams up with a 700R transmission that makes for some good gas mileage. Consistently 19 miles per gallon.  The new dual exhaust system has Flowmaster mufflers that lead out to the correct 70 Chevelle polished tips. The car has also had electric cut-outs installed, for those times when ordinary just isn’t enough.
Under the hood with the new motor, there is a new alternator, battery, brake booster, 4core radiator, hoses, belts, and starter. Too much to mention.
All of this sits on a set of American Racing Torque Thrust Wheels with GoodYear tires that complete the ride and look.
I wouldn’t hesitate to drive this car anywhere. It is a great cruising or show car.
You are welcome to come inspect and drive this car. If you would like anymore pictures please ask.
We reserve the right to end this auction early as the car is for sale locally. There is possible shipping. We will need a $1000.00 nonrefundable deposit within 24 hours of auction end. This is a CASH IN PERSON only sale.
If you have any questions please call Bobby at (270)590-6484. Phone calls will be faster than emails, as they will only be answered at night.