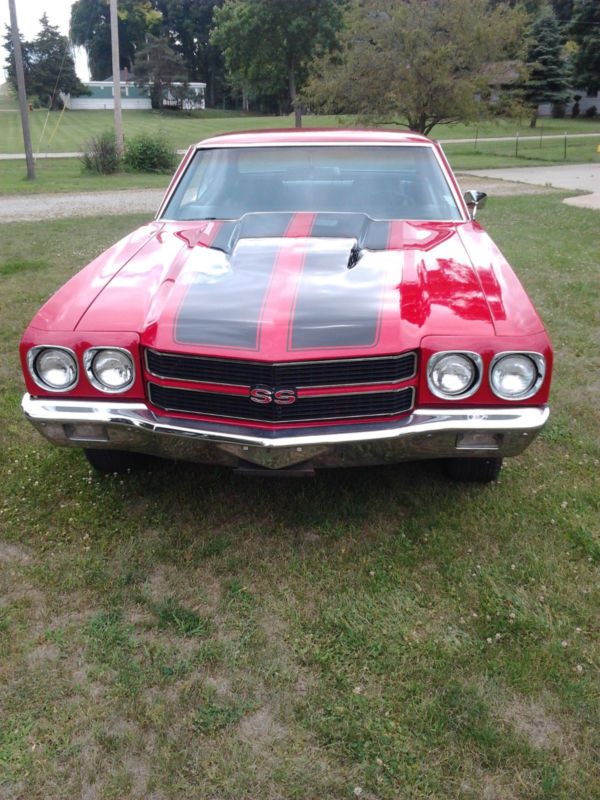 FOR SALE IS A 1970 CHEVELLE SS 396CI / 350 HORSEPOWER W/ NUMBER MATCHING "L34" ENGINE. THIS CAR WAS BORN FROM GM IN
1970 A REAL FACTORY SS CAR "Z25" SS-396 WITH AIR CONDITIONING, NOT A CLONE! THIS CAR HAS NCRS PAPERWORK TO BE
INCLUDED WITH THE CAR IF SOLD. THE CAR IS PRESENTLY CRANBERRY RED WITH BLACK STRIPES WITH BLACK INTERIOR.

THE CAR IS A FACTORY 3-SPEED AUTOMATIC CAR AND AND A BUCKET SEAT CAR CENTER CONSOLE CAR WITH FACTORY HORSE SHOE
SHIFTER. THE CAR HAS THE ORIGINAL TRIM TAG SPECIFYING CODE "756" FOR BLACK BUCKET SEATS.

HISTORY OF CAR:
THE GM OFFICIAL PRODUCTION DATE WAS 01/12/1970.
THE ORIGINAL DELIVERY DEALER WAS DEALER CODE 227 IN ZONE 7.
THE CAR'S ENGINE BLOCK IS STAMPED WITH CTW CODE MEANING: 396 350HP L34 W/ AUTOMATIC TRANSMISSION. THE ENGINE BLOCK
ALSO IS STAMPED WITH THE LAST SIX DIGITS OF THE CAR'S VIN.