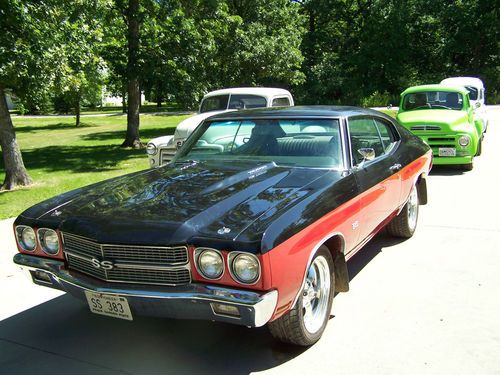 I have for sale a very nice 1970 Chevelle SS 383 Stroker Stealth Ram Fuel Injection($2800) 6 Speed Manual($2000). Canfield Aluminum Heads ($2500)The VIN says this is not a true SS. It has exactly what an SS would have but is not a 454. This is a no reserve auction and starting bid is less than 1/2 of what I have invested. Does have cowl induction hood and all correct SS GM badges, 12 bolt rear, power front discs, SS dash with tach, This is a zero rust car! Car had 33,000 original miles but i can not document that.Odomotor now has 4000 some odd miles on it. It was at zero after rebuild. Boyd Coddington wheels and new tires, new front end. all bushings and ball joints and tie rod ends were replaced. Rearend was gone through and has trutrac posi with new 373 gears. All bushings replace in rear trailing arms also. Front buckets are not original. These are leather seats out of a newer model camaro. Chevelle seats not comfortable to me. This car absolutely flys. I have been the only driver and have babied this car since frame off rotisserie rebuild. Bottom is clean and painted red. Stainless headers and stainless Flomaster exhaust all the way out the back. New Gas tank and Holley fuel pump to match EFI. Any questions please message me via ebay. Buyer is responcible for all shipping. I will store for up to 60 days and will help shipper load if needed. Thanks for looking and check out my other listings.