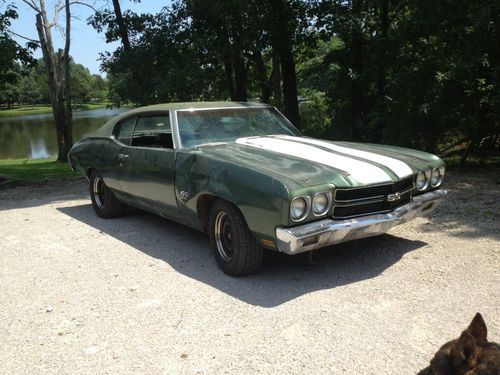 1970 SS 396 MATCHING NUMBERS TRUE SS CAR   with only 60,643 original miles that runs and drives .... This car has been sitting since 1994 when it was put away to have a restoration done ,,, since then due to uncontrollable circumstances it is now up for sale ... I just purchased this nice solid car from a friend who had it stored away but was forced to sell for financial reasons .... I operate a full restoration shop where he was going to have the car restored before he was forced to sell it ... So he offered the car to me first , and i gladly bought it ... so this car can be bought as - is  or i can sell it partially or fully restored for you ... I would gladly give you restoration costs if your interested . if not this is a very nice car to do yourself .... it is 95% unmolested ... all parts are original to this car ... it currently has a electric fuel pump instead of the original pump ... and hei distributer  to get it running again ... engine fired up and sounded fantastic and shifted great after i changed the fluids and filters ...it doesnt have a gastank in it so i just started itfrom a hose to a can but it is a running drivable car to loadv on to your trailer ..    I ALSO FOUND THE BUILD SHEET UNDER THE DRIVERS FOOT FLOORBOARD .... it is barely legible but some information can be made out ... the build sheet matches trim tag .. this car was built in Arlington Texas  . in May of 1970    this car has p/s p/b factory a/c 400 turbo with a 12 bolt rearend ... I HONESTLY BELIEVE THAT THIS LOW MILE DRIVETRAIN CAN BE CLEANED , PAINTED ,  and some new gaskets and reinstalled ... it sounds and appears to be in very good condition ...but you can make that decision yourself...  Please ask any questions you may have and i will answer them to the best of my knowledge ... you are more than welcome to come see the car anytime before auction ends also ..FLOORS AND TRUNK ARE SOLID ... trunk has 1 rust spot due to a place that water leaked into ... but i removed the carpet and inspected the floors and was shocked at how super clean they were...in my opinion this car can be built with only replacing the fenders and quarter panels ...  Happy bidding  !!  its a real nice builder .... thanks Rich This car also comes with the original ss wheels these wheels are only on there to make it roll.