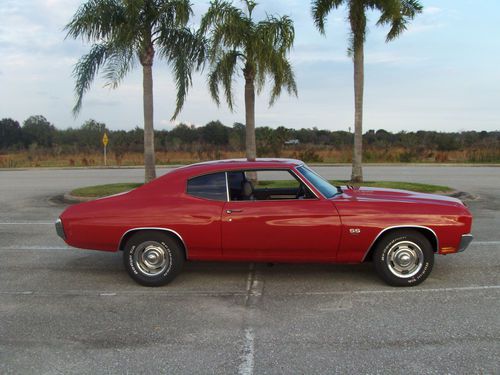 1970 Chevelle 2 door hardtop SS clone (not an orignal SS car). Candy apple red (urethane paint) with 3 clear coats. It has a stock 454 motor with a quadra jet 4 barrel carb. The transmission is a 400 automatic (3 speed). And the rear end is     a 12 bolt 3:73 posi. The car is in overall good shape. It is not a perfect "Barrett Jackson" car, but it is an eye catcher and a very collectable car. This one had factory a/c but now it does not have heat or a/c. It does come with an extra hood that I have for it.1970 seems to be a popular year for muscle cars because Ford, Chevy,Mopar, and all the big guys were really putting out big motor muscle cars that year. Just look up any 1970 muscle car at an auction or car lot and you will see the 1970 muscle cars are normally  more expensive than the other year cars. The car has a clear florida title that I want out of my name when sold. It is being sold "as is". Full payment is due by 7 days after the auction ends. Thanks for looking at my auction..........