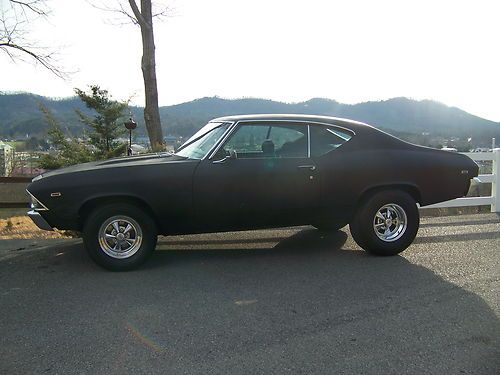 UP FOR SALE IS A 1969 CHEVY CHEVELLE MALIBU WITH A FRESH GOOD SOUNDING 350 ENG. AND A BORG & WARRENER SUPER T-10 4 SPEED TRANS WITH A 2.64 RATIO FIRST GEAR AND  NEW HAYS CLUTCH AND A NEW 390 POSI REAR END SET-UP !!!! THIS CAR WILL FLAT-OUT HOOK & RUN !!!! THIS CAR HAS HAD A LOT OF WORK DONE TO IT AND A LOT OF MONEY SPENT ON NICE NEW HIGH PERFORMANCE PARTS PUT ON IT !!!!  UNDER THE HOOD FRESH 350 SB. HARD HIT-IN GOOD SOUNDING HAS HOOKER HEADERS , WITH 2 1/2 INCH EXHAUST RAN OUT TO RIGHT BEFORE THE REAR END . ALSO SUMMIT RACING AIR BREATHER WITH NEW K&N RECHARGABLE AIR FILTER AND HOLLEY 750 DUEL FEED DOUBLE PUMPER CARB, SITTING ON A NEW EDELBROCK RPM AIR GAP ALUMINUM INTAKE . IT HAS A NICE DUEL FEED CARB LINE SET-UP WITH MOROSO FUEL PRESURE GAUGE ,AND A CHROME WATER NECK AND NEW ALTERNATOR AND CHROME BRACKETS AND NEW HIGH OUT PUT HOLLEY CHROME MANUEL FUEL PUMP !!!! ALSO HAS A BIG 4 CORE RADIATOR AND NEW FLEX FAN AND SPACER AND NEW BILLET ALUMINUM PULLEYS !!! ALSO  NEW TCI BALANCER AND NEW SUMMIT READY TO RUN BRAND DISTRIBUTOR AND SUPER COIL !!! ALSO NEW BLUE MAX PLUG WIRES AND TALL CHROME EDELBROCK VALVE COVERS AND BREATHER CAPS AND CHROME RADIATOR SUPORT !!! HEADS ON CAR HAS GUIDE PLATES AND 1.5 ALUMINUM ROLLER ROCKERS !!!! IT HAS A NEW MASTER CYLINDER AND NEW BRAKE LINES AND A NEW DISC BRAKE SET-UP IN FRONT AND NEW DRUM BRAKES ON REAR !!!! THE REAR END HAS BEEN COMPLETLY GONE THROUGH NEW BEARINGS , NEW SUPERIOR REAR AXLES NEW MOROSO BRUTE STRENGTH REAR WITH NEW YUKON 390 POSI GEARS AND NO HOP BAR !!!! AND A NEW SUMMIT  ALUMINUM 12 BOLT COVER WITH FILL PLUG AND MAGNETIC DRAIN PLUG !!!! ALSO HAS ALL NEW WHEEL STUDS ALL THE WAY AROUND !!!! CAR HAS NEW HURST 4 SPEED SHORT THROW SHIFTER . CAR WAS FROST GREEN ORGINAL BUT IS IN BLACK PRIMER RIGHT NOW . CAR HAS A VERY SOLID BODY WITH NO RUST AND A GOOD SOLID FRAME AND GOOD FLOOR PAN'S AND TRUNK PAN !!!! CAR HAS ALL GOOD GLASS FRONT & REAR WINDOWS ROLL UP & DOWN SMOOTHLY AS THEY SHOULD !!! ALL THE HEADLIGHTS , TAILIGHTS AND BLINKER AND REVERSE LIGHTS WORK !!! YOU WILL ALSO GET ALL NEW FRONT END PARTS TO REBUILD FRONT END AND THE STOCK REAR SPRINGS FOR CAR !!!CAR HAS ALL GOOD WIREING AND FUSE BOX !!! IT HAS ALL NEW MARKER LIGHTS AND BEZELS ON CAR . REDS IN REAR AND YELLOWS IN FRONT . CAR HAS GOOD GAS TANK AND GAS GUAGE WORKS IN DASH !!! THE DOME LIGHTS WORK TOO !!!! CAR HAS CRAGAR 5 SPOKES WHEELS AND FRONT TIRES ARE FORMULA-GT'S AND REAR ARE MICKEY THOMPSON DRAG RADIALS !!! IT HAS A NICE 3 SPOKE STEERING WHEEL A WORKING AUTO GUAGE BY AUTO METER TACH AND OIL, AMP, AND WATER TEMP GUAGES ALSO !!! CAR HAS NICE CARPET , HEAD LINER , AND DOOR PANLES AND FRONT AND REAR DASH !!! ALL THIS CAR NEEDS IS A GOOD RUB DOWN AND A PAINT JOB WHAT EVER COLOR YOU LIKE !!!! ALL THE HARD WORK HAS BEEN DONE !!!! THEIR ARE MORE THINGS I COULD LIST MORE BUT JUST LOOK AT PIC'S GOOD AND YOUR ARE MORE THEN WELCOME TO COME LOOK THE CAR OVER  IN PERSON !!! DONT BUY THE CAR JUST TO COME LOOK AT IT . IF YOU ARE A SERIOUS BUYER AND THIS IS WHAT YOUR LOOKING FOR I AM HERE TO HELP YOU ANY WAY I CAN !!! PLEASE ANYONE WITH LESS THEN A 10 SCORE DONT BID ON MY ITEM AND I RECUIRE A 1,000 DEPOSIT WITH IN 24 HOURS AND FULL PAYMENT IN 7 DAYS !!! SERIOUS ONLY !!!! THANK'S !!!!!