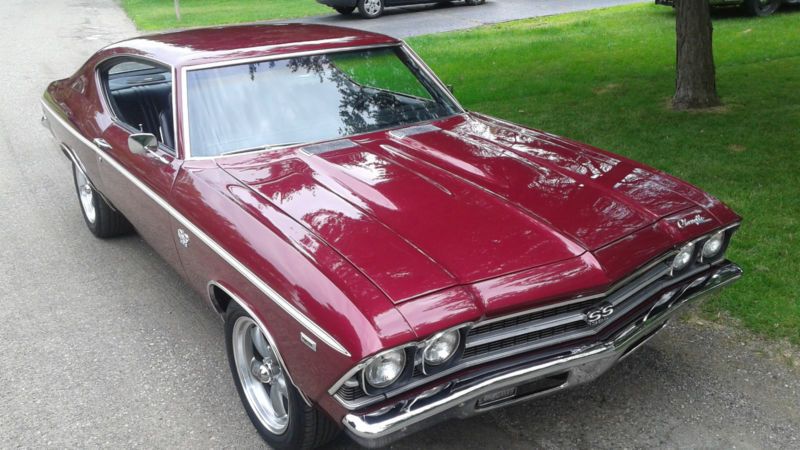 Canadian made Chevelle SS396 for U.S. Sales market ! Cowl Tag confirms options on these Canadian SS cars,
including the 396 motor ! Heritage Report confirms all options ! Red car, Came with bucket seat interior,
console, SS 396 Package, Z25 ! # Matching 396 was rebuilt recently and given considerably more HP, like 425hp.
The 12 bolt is housing a 3:70 Posi gear. The paint on the car is extremely nice, smooth and shiny, very well done !
The interior is new, and looks excellent, new 'SS 396' custom floor mats ! The engine bay is spotless, March
pully set, large tube headers, aluminum valve covers were expensive ! The trunk has correct GM spatter paint, and
spare and jack with mat. The underside of the car is smooth and painted satin black. New suspension components
under the car, very detailed undercarriage ! New 17" Ridler Wheels and new tires. New Exhaust, new gas tank...
The car really sounds tough even at idle. Starts right up and runs very strong !! If you want a number matching
car, don't keep waiting, there aren't many like this one, and it's documented. Car has aftermarket radio with
cassette player and has CD changer mounted in trunk...everything works. Sport steering wheel option. Fast, Loud,
and Beautiful !